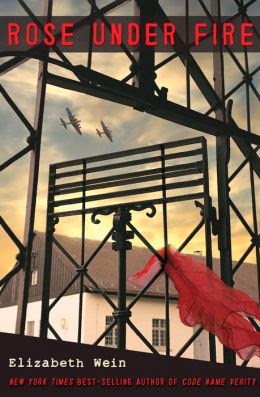 
While flying an Allied fighter plane from Paris to England, American ATA pilot and amateur poet, Rose Justice, is captured by the Nazis and sent to Ravensbr ck, the notorious women's concentration camp. Trapped in horrific circumstances, Rose finds hope in the impossible through the loyalty, bravery and friendship of her fellow prisoners. But will that be enough to endure the fate that's in store for her

Elizabeth Wein, author of the critically-acclaimed and best-selling Code Name Verity, delivers another stunning WWII thriller. The unforgettable story of Rose Justice is forged from heart-wrenching courage, resolve, and the slim, bright chance of survival.

Winner of the 2014 Schneider Family Book Award for Teens

Oft times sequels don't live up to the books that spawned them. Rose Under Fire is not one of these. I absolutely love Wein's Code Name Verity and was understandably concerned about whether its follow-up could fulfill my lofty expectations. My concern was completely unwarranted.

Rose Under Fire is one of the most powerful novels about the holocaust experience ever written. Don't get me wrong. I loved The Book Thief. I loved The Boy Who Dared and The Boy in the Striped Pajamas. But this book trumps them all. Rose is an American ATA transport pilot flying for the British during World War II. She is captured by the Nazi's and sent to Ravensbrook concentration camp where she spends the next six months in the company of the Rabbits, a group of women who were used in Nazi medical experiments.

Rose's story is vivid, shocking, horrifying, touching, memorable and life-altering. I cannot give enough praise for Wein's simply brilliant story-telling. If you read no other book this year, read Rose Under Fire -- and of course, Code Name Verity. Two books worthy of everyone's attention. They literally made me weep.