BOOK REVIEW: THE ONE AND ONLY IVAN 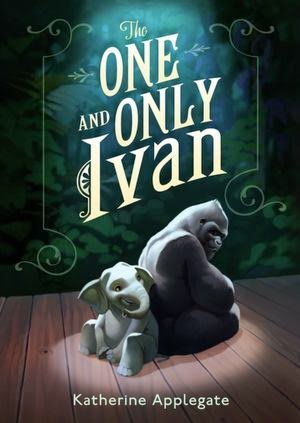 THE ONE AND ONLY IVAN
Katherine Applegate
HarperCollins
305 pp.
Ages 8 -12

Ivan is an easygoing gorilla. Living at the Exit 8 Big Top Mall and Video Arcade, he has grown accustomed to humans watching him through the glass walls of his domain. He rarely misses his life in the jungle. In fact, he hardly ever thinks about it at all.

Instead, Ivan thinks about TV shows he’s seen and about his friends Stella, an elderly elephant, and Bob, a stray dog. But mostly Ivan thinks about art and how to capture the taste of a mango or the sound of leaves with color and a well-placed line.

Then he meets Ruby, a baby elephant taken from her family, and she makes Ivan see their home—and his own art—through new eyes. When Ruby arrives, change comes with her, and it’s up to Ivan to make it a change for the better.

I had the pleasure of meeting Ms. Applegate a few months ago and I kicked myself because I had left my copy of The One and Only Ivan at home. I ended up buying a  new copy for her to sign and donated my older copy to my son's school. I will treasure this book always.

Ivan was inspired by a real gorilla named Ivan who spent 27 years of his life in a shopping mall cage. He was eventually taken to a zoo habitat where he lived out the remainder of his days. I believe he just passed away last year, not long after the book was released.

Applegate's story is fictional, told in Ivan's voice, but it really hits home. The spare text and simple sketches capture beautifully the heart of the story--and the hearts of readers. I couldn't help but fall in love with Ivan and his elephant companions Ruby and Stella. It's one of those books you just won't ever forget. It definitely deserved the Newbery Award it received. The One and Only Ivan has found a permanent home in my personal library.

Profanity:  None
Violence:  None
Sexualtiy:  None