BOOK REVIEW: THE SECRET HUM OF A DAISY by Tracy Holtzer 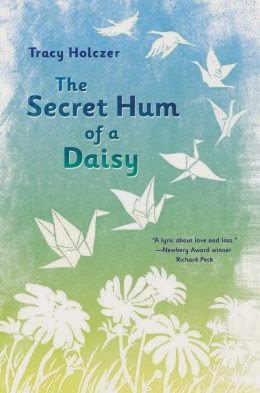 
Twelve-year-old Grace and her mother have always been their own family, traveling from place to place like gypsies. But Grace wants to finally have a home all their own. Just when she thinks she's found it her mother says it's time to move again. Grace summons the courage to tell her mother how she really feels and will always regret that her last words to her were angry ones.

After her mother's sudden death, Grace is forced to live with a grandmother she's never met. She can't imagine her mother would want her to stay with this stranger. Then Grace finds clues in a mysterious treasure hunt, just like the ones her mother used to send her on. Maybe it is her mother, showing her the way to her true home.


Tracy Holczer's story begins with a heartwrenching loss for young Grace. After her mother drowns in a river, she moves in with her estranged grandmother who she's come to believe must be a bad person. Grace has to discover the truth about her mother and grandmother's history for herself before finally settling into where she truly belongs.

The Secret Hum of a Daisy has a sort of lullaby quality to it, reminiscent of Kathryn Erksine's Mockingbird, Walk Two Moons by Sharon Creech and Cynthia Rylant's Missing May. While the book did feel just a little long for middle grade, I never bored with Grace's story. Rather by the time it ended, I Grace and Grandma and Jo and the other characters felt like old friends. A very strong debut.