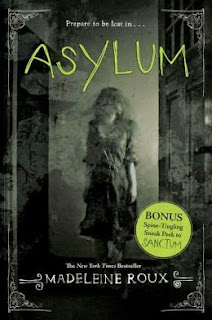 Madeleine Roux's New York Times bestselling Asylum is a thrilling and creepy photo-illustrated novel that Publishers Weekly called "a strong YA debut that reveals the enduring impact of buried trauma on a place." Featuring found photographs from real asylums and filled with chilling mystery and page-turning suspense, Asylum is a horror story that treads the line between genius and insanity, perfect for fans of Miss Peregrine's Home for Peculiar Children.

For sixteen-year-old Dan Crawford, the New Hampshire College Prep program is the chance of a lifetime. Except that when Dan arrives, he finds that the usual summer housing has been closed, forcing students to stay in the crumbling Brookline Dorm—formerly a psychiatric hospital. As Dan and his new friends Abby and Jordan start exploring Brookline's twisty halls and hidden basement, they uncover disturbing secrets about what really went on here . . . secrets that link Dan and his friends to the asylum's dark past. Because Brookline was no ordinary mental hospital, and there are some secrets that refuse to stay buried.

I had just finished reading Ms. Peregrine's Home for Peculiar Children, which I liked, and was browsing a table display at Barnes & Noble when I spotted this. I'd heard good things about it, and it had creepy pictures like Riggs' book, so I figured why not?

I don't seem the type to like creepy books, but I do. And Asylum is deliciously creepy. It starts off kind of "normal," three new friends at summer school where the dorms are located in an old abandoned mental hospital where the Warden once performed horrible operations on the criminally insane. The story sets up easily as we learn about these kids. No biggie. But then little by little, things start to get weird. By half way into it, I was completely hooked.

A tantalizing blend of murder and the supernatural, Asylum is sure to keep you up at night...turning pages and looking over your shoulder.

P.S. LOOKING FOR MORE CREEPY READS? CHECK OUT THESE...

The Forest of Hands and Teeth by Carrie Ryan

The Gardener by S.A. Bodeen

The Girl with All the Gifts by M.R. Carey

The Monstromologist by Rick Yancey

The Ocean at the End of the Lane by Neil Gaiman