Marvelous Middle Grade Monday is sponsored by Shannon Messenger at Ramblings of a Wannabe Scribe. For a complete list of today's participants, visit HERE. 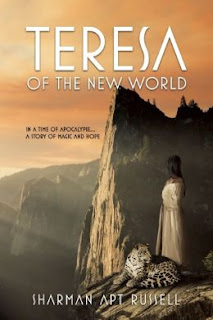 
In 1528, the real-life conquistador Cabeza de Vaca shipwrecked in the New World where he lived for eight years as a slave, trader, and shaman. In this lyrical weaving of history and myth, the adventurer takes his young daughter Teresa from her home in Texas to walk westward into the setting sun, their travels accompanied by miracles--visions and prophecies. But when Teresa reaches the outposts of New Spain, life is not what her father had promised.

As a kitchen servant in the household of a Spanish official, Teresa grows up estranged from the magic she knew as a child, when she could speak to the earth and listen to animals. When a new epidemic of measles devastates the area, the sixteen-year-old sets off on her own journey, befriending a Mayan were-jaguar who cannot control his shape-shifting and a warhorse abandoned by his Spanish owner. Now Teresa moves through a land stalked by Plague: smallpox as well as measles, typhus, and scarlet fever.

Soon it becomes clear that Teresa and her friends are being manipulated and driven by forces they do not understand. To save herself and others, Teresa will find herself listening again to the earth, sinking underground, swimming through limestone and fossil, opening to the power of root and stone. As she searches for her place in the New World, she will travel farther and deeper than she had ever imagined.

This book was recommended to me by my professor, as it was written  by a friend of hers. I like this professor so I agreed to check it out. I wasn't exactly sure what to expect, but as I started reading about de Vaca and his daughter, I was completely drawn into the story. Russell's writing is a lyrical blend of mythology, history, and magical realism. Teresa's world is so vivid, I felt as though I had stepped into a painting. The book has the feel of legend, and the author incorporates the mystical elements so effectively as to convince the reader that these elements might really be as much a part of history as de Vaca himself.

While I do question whether the literary style of the writing would actually appeal to middle grade readers or adolescents, the vocabulary and subject matter are certainly appropriate for younger readers. Overall, Teresa of the New World would make a fine addition to any home or school library, and would especially complement curriculum about the European exploration of the New World.

Profanity:  None
Violence:  Mild
Sexuality:  None
Posted by Laurisa White Reyes at 8:42 AM