BOOK REVIEW: AFTER THE ASHES by Sara Joiner 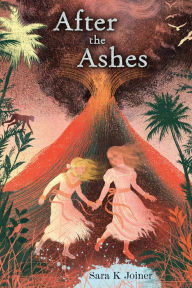 In this riveting coming-of-age survival story, a stubborn and intellectual teen must fight for her life when the mighty volcano Krakatau erupts and puts her hometown on the Javanese coast in mortal danger.

In 1883, on the island of Java in the Dutch East Indies, thirteen-year-old Katrien Courtland is determined to prove Darwin's theory of natural selection. Unfortunately, nothing causes her Aunt Greet more angst than Katrien crawling around the muddy jungle collecting bugs in the name of science—and in the company of a native boy, no less! If only Katrien would take an interest in running a household and making friends with other girls. But Katrien has no interest in changing, especially if it means socializing with the likes of mean Brigitta Burkhart

Then, one stifling afternoon, Katrien's world turns upside-down when the nearby volcano Krakatau erupts with a terrifying blast. For days, a deathly ash rains down on the Javan coast, and everything is soon buried under the dust or destroyed by the tsunamis that follow. Amidst the chaos, Katrien knows her only hope of survival is to flee the jungle with the one person she vowed she'd never befriend.
Set against the backdrop of one of the most spectacularly horrifying natural disasters in human history, this debut novel by Sara Joiner is by turns exciting, funny, tragic and poignant.


I received After the Ashes from the publisher for review. What drew me to the story was Krakatoa. I remember, vaguely, watching the old movie Krakatoa: East of Java many decades ago. And I've always been fascinated by volcanoes and the destruction they've wreaked. Last year I visited the museum exhibit on Mt. Vesuvius, the volcano that destroyed Pompeii in 79 AD. So I was really interested in how the most destructive volcanic eruption in recorded history would be depicted in a novel for middle grade readers.

The story is told through the POV of eleven-year-old Katrien, who is of Dutch descent but has lived her entire life on Java in the East Indies. The first half of the novel sets up her bitter rivalry with another Dutch girl, Brigitta. Katrien is a naturalist, always quoting Charles Darwin's The Origin of Species and collecting insects in the jungle.

Krakatoa, a volcano on an island 40 kilometers away, is believed to be harmless, too distant to do any damage even if it did erupt. The actual eruption occurs about half way through the novel, and from that point on, the book takes a sudden and chilling turn. The author superbly recreates the horror and devastation of the falling ash, the fearsome quakes, and worst of all, the tsunamis, which killed more than 34,000 people. Katrien and Brigitta are two of the very few survivors and must rely on each other to reach safety.

After the Ashes is brilliantly written, and I felt shattered reading about Katrien's losses and struggles. While this is a middle grade novel, listed for ages 9 - 12, some of the details are a bit graphic and might be too much for younger readers. But there is no other way to describe the effects of Krakatoa.

All in all, I couldn't put this book down and can't recommend it highly enough.

Posted by Laurisa White Reyes at 10:00 AM