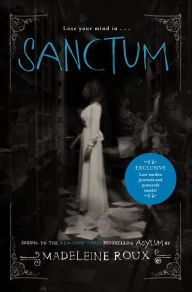 The past is back to haunt them.

Dan, Abby, and Jordan remain traumatized by the summer they shared in the Brookline asylum. Much as they'd love to move on, someone is determined to keep the terror alive, sending the teens photos of an old-timey carnival, with no note and no name. Finally, Dan receives a list of coordinates pointing to abandoned houses in the town near Brookline, and he is convinced that the only way to end this nightmare once and for all is to return to New Hampshire College and follow the trail.

But when Dan and his friends arrive under the guise of a prospective students' weekend, they discover that the carnival from their photos isn't just real, it's here on campus—it has returned for the first time in many years. And as they sneak away from their undergrad hosts to visit the houses on their list, they find secrets far darker than anything they'd imagined.

In this thrilling and creepy sequel to the New York Times bestselling Asylum, found photographs from real vintage carnivals help tell the story of three teens who exist on the line between past and present, genius and insanity.

I read Roux's first book in this series, Asylum, and loved it. Loved it enough to buy book 2 the moment it came out in paperback. Dan and his friends return to the college near Brookline, hunting down a list of addresses provided by the now-hospitalized psycho murderer from book 1. Dan keeps having these weird visions of the Warden's life as he uncovers his sinister childhood and later research into mind control.

While Sanctum was a great read on its own, it lacked the strength and tension of Asylum. I kept waiting for someone to die. Eventually, things picked up and got a little gory (which was great) but it took just a tad too long to set everything up. And I just didn't feel completely satisfied when it was all over.

Having said that, is Sanctum worth reading? Absolutely yes! It is a strong YA horror novel with just enough mystery and blood-letting to make the ride worth-while. I just might pick up book 3, Catacomb, to see what happens next. I've kind of gotten attached to Dan and his buddies.

Overall, I give Sanctum: