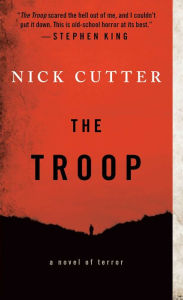 
WINNER OF THE JAMES HERBERT AWARD FOR HORROR WRITING

“The Troop scared the hell out of me, and I couldn’t put it down. This is old-school horror at its best.” —Stephen King

Once every year, Scoutmaster Tim Riggs leads a troop of boys into the Canadian wilderness for a weekend camping trip—a tradition as comforting and reliable as a good ghost story around a roaring bonfire. But when an unexpected intruder stumbles upon their campsite—shockingly thin, disturbingly pale, and voraciously hungry—Tim and the boys are exposed to something far more frightening than any tale of terror. The human carrier of a bioengineered nightmare. A horror that spreads faster than fear. A harrowing struggle for survival with no escape from the elements, the infected…or one another.

Part Lord of the Flies, part 28 Days Later—and all-consuming—this tightly written, edge-of-your-seat thriller takes you deep into the heart of darkness, where fear feeds on sanity…and terror hungers for more.

Picked this one up at Mysterious Galaxy in San Diego, CA. Mysterious Galaxy is my favorite genre-specific bookstore, specializing in everything speculative, including the best in horror. The Troop got a rave review from Stephen King and won some awards, so I had high expectations. Perhaps a little too high.

The book has everything a tasty bit of horror should have: children gone bad, a sinister presence lurking in the woods, blood and gore, and suspense to make your eyeballs pop. The story follows a troop of 14-year-old Boy Scouts and their leader on a weekend excursion to a sequestered island off the coast of Canada. But then "the hungry man" motors ashore. Infested with a worm with an insatiable appetite, the "hungry man" infects the scouts one by one. The result is rather terrifying and gruesome.

I did enjoy The Troop immensely. Did it live up to my expectations? Not quite. It was a tad predictable, though there were many hints at something really horrible happening in the future that simply never came to fruition. That disappointed me. But not enough to dislike the book. The Troop, over all, was a whole lot of fun, and it is definitely worth plunking down the dough to buy at your local book shop, though I think I'd suggest the lesser price of a paperback.

A strong addition to the horror genre. Could have been better. But I liked it enough to give it:

Profanity:  High
Sexuality:  Moderate (teen boys talking about boobs, and such)
Violence:  High
Posted by Laurisa White Reyes at 9:27 AM