INTERVIEW WITH THE AUTHOR OF THE DINING CAR 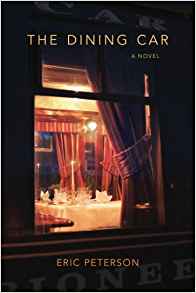 I recently reviewed THE DINING CAR by Eric Peterson. Loved that book! So I contacted him for an interview. You'll find that and an excerpt below. Enjoy!

1. Your protagonist, Horace Button, is a distinctive character. Tell us about him.

Horace Button is a legendary food writer and social critic. He’s bigger than life. Enormous in stature, pompous, grandiloquent, often drunk -- his appetites are as unchecked as his opinions. He travels the country by private railroad car because he reviles airports and airplanes. He’s that curmudgeon who lives in the past, who uses his silver-headed walking stick to make threatening motions at immigrant taxi drivers and children playing in the streets.

2. Equally unique is Horace's chosen mode of transportation. What inspired you to set your book in a rail car?

The inspiration came from a real-life food and wine writer named Lucius Beebe, who traveled the country by private railroad car, and who gave form to my Horace Button character. Beebe’s heyday was the first half of the last century, but his eccentric mode of transportation—a renovated Pullman business car—worked in a contemporary novel, since private rail cars are still in service today. As a literary device, the private rail car serves as a crucible—it holds the characters together. When things heat up, we see how they react.

3. What is your favorite way to travel and why?

I regularly contribute travel essays to a friend’s online magazine, Pillar to Post. Many of these essays detail exotic trips that I’ve had the pleasure of taking: sailing to Alaska aboard a super yacht, traveling across the country on private railroad cars, touring the west in a 42’ luxury motorhome. The super yacht and railroad cars all had their dedicated crews, including private chefs, and the scenery on these trips was breathtaking—vistas you’d never see from the road. But in the motorhome, my wife, Teresa, and I are the crew. Teresa’s a terrific chef. We can start and stop on our own schedule, and wherever we go, we’re always at home. There’s a comfort in that. I suppose for the long haul, the motorhome is my favorite way to travel.

4. What has been your most memorable trip?

Three couples occupying two private railroad cars—a vista dome and a sleeper—on the back of an Amtrak train. We boarded in Los Angeles. The mahogany paneled vista dome had a glass-enclosed upper lounge with leather swivel chairs and below it, a large, formal dining room. The lower lounge was equipped with an in-motion satellite TV system and had an open platform on the back. In the sleeper car, each couple had their own stateroom, including full bath and shower. The cars were staffed with a chef and a car attendant, who served martinis and champagne upstairs in the vista dome lounge as we snaked through the mountains on our way to Chicago. We ate three meals a day on white linen tablecloths. I’ll never forget that one.

5. Fine liquor plays a major role in this story as well. Did you have bartending experience before writing The Dining Car?

I worked as a bartender in college. Then, much later in life, I found myself running a fine-dining steak and seafood restaurant, where I took occasional stints behind the bar. My brother was the original equity partner in the restaurant—he and I eventually closed it down—but the experience inspired The Dining Car. I wanted to write a novel about the restaurant culture, and what it means to be of service to your customers, no matter how tempted you might be to berate them or to tell them off.

6. In this time when our nation is so divided, you use humor to reveal your characters' political differences. What advice do you have for America today?

Somewhere along the way, I picked up a nugget of writing advice: as with real people, each of your characters must see himself as the hero in his own life. I’ve written some quirky characters, but if they ring true, it’s because each one believes firmly in his world view. So that would be my advice: respect others’ world views. Most people, I think, are sincere in what they believe. I write to entertain. I never intended The Dining Car to be instructional or symbolic, but if you’re looking for a message in the book, you’ll probably find one in the same way you’d find meaning in the inkblots of a Rorschach test.

7. As a self-published author, what challenges have you faced along your journey?

I’ve been unbelievably fortunate in my career as an independent author/publisher, fortunate that my work has gotten noticed, and that it’s won some awards. The greatest challenge for me, on a personal level, is production. Life as a Sandwich took me six years to write, and The Dining Car took five. I need to step up the pace, without sacrificing quality. When I decided early on, with Sandwich, to go the independent publishing route, I knew I was trading the challenge of finding an agent and a traditional publishing house for the challenge of building my own audience through my own books. It’s still the challenge I’d prefer to have.

8. How was writing The Dining Car different than your first book, Life as a Sandwich?

From inception, The Dining Car was much more structured than Life as a Sandwich. I spent a great deal of time on plot and subplots, and on developing the characters. I also mapped out each chapter in much greater detail. In fact, readers might be surprised at the level to which I outline before I start writing. I involved a story editor in The Dining Car, which I never had with Sandwich. My editor, Jennifer Redmond, challenged me to cut 20,000 words from the original polished draft, including all the backstory, and that’s what gives the book its great pace.

9. Horace Button changes and evolves throughout the book. How has The Dining Car changed you?

The Dining Car has been my breakthrough book as a writer. It’s changed my world, both professionally and personally. Awards shouldn’t be all that important, but as an independent author and publisher, to win the Independent Book Publishers Association’s (IBPA’s) Benjamin Franklin Gold Award for Popular Fiction is a monumental event. It silenced that voice of doubt in my head that my writing might be self-indulgent and a waste of time. It showed that my work was taken seriously. And good things keep happening: We received a review in Publishers Weekly, we were named a BookLife “Book to Watch,” we won the San Diego Book Award Gold Medal for Contemporary Fiction. We’ve had inquiries about TV and movie rights from Hollywood. On a personal level, as a direct result of this book, I’ve met some amazing people, I’ve made some great friends, and I continue to receive invitations for travel and speaking opportunities that I wouldn’t have imagined a few short years ago, when I was sitting alone at my desk, working on this manuscript.

EXCERPT FROM THE DINING CAR:

On a long, straight stretch of causeway approaching Sacramento, California, the railroad runs parallel to Interstate 80.  For drivers on the highway that Tuesday morning in August, the old Pullman hitching a ride on the back of the California Zephyr must have seemed an oddity—an antique running at breakneck speed, hanging on for dear life, looking frilly and absurd as if some time-traveler’s experiment had gone horribly wrong.
The Pioneer Mother was no more anachronistic or improbable than its demanding passenger, but tending bar aboard this vintage railcar suited me.  For once, I was free to reflect on ground covered without guilt or self-rebuke.  I relished seeing the endless thread of receding, creosote-stained track, the golden rolling foothills and heavily forested canyons east of Sacramento, the tunnels that plunged us into blackness and then yielded us, just as suddenly, into bright sunlight.  With each passing mile, I was shedding my incriminatory past as a snake sheds its skin.
In the serpentine curves of the Sierra Nevada Mountains, hugging sheer granite cliffs, the train slowed to a crawl.  Then, on Donner Pass, we cleared a long snow shed and came to a dead stop.  We sat for nearly an hour under a chairlift at the deserted Sugar Bowl Ski Resort, where high weeds and blue lupine flowers overgrew the detached chairs that were scattered haphazardly around the bottom terminal of a lift.  Frequent stops for no apparent reason, slowdowns on extended stretches of track, long-drawn-out delays on sidings while waiting for an oncoming train to pass—these things did not bother me, but they drove Wanda mad.
“Who the hell’s operating this thing?” she said.  “A stoned sloth?”
Working behind the stoves in the cramped galley, Wanda’s trains always ran on time.  She could flawlessly choreograph a four-course meal without seeming to think about it, but you wouldn’t know it by the way she trash-talked her work.
“Dog vomit,” she said, poking at the sauce béarnaise.  “Monkey piss,” she said, dipping a finger into a pot of consommé Julienne.  “Regurgitated hog maw,” she said, taking a tray of potatoes au gratin from the oven. “Flush hard, ladies and gentlemen of the Zephyr,” she said. “It’s a long way to Mother’s galley.” She held her nose, she fanned the air with kitchen towels, she sneered at the plates of food as they went out.
From the other side of the pass-through, I watched her closely. I listened for her voice. In my former world, the world of pampered, Division 1 college athletes, humility was a rare trait. If I was moderately attracted to this woman, I dismissed it as early onset of Stockholm syndrome—the hostage falling for his captor.
I threw myself into my bartending duties without regard to where we were headed or when we would get there.  My future was squarely in the hands of my eccentric employer, a quirky chef, and the crew of the train to which we were yoked.
The Zephyr left Reno nearly two hours late.

Posted by Laurisa White Reyes at 6:50 AM