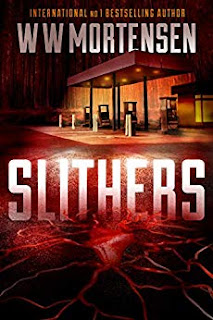 On a remote country road, heading out to a weekend party, Tobe West and his friends pick up two hitchhikers. It seems like the right thing to do.

No-one could have predicted the freak car accident that is about to change their lives.

Stranded in the middle of nowhere, Tobe and the others are faced with a landscape suddenly unfamiliar, in a universe that has come loose from its moorings. Strange things slither in the woods, and spectral lights hover just off the road. A petrol station, shining brightly in a world otherwise dark and frightening, promises safe haven, but Tobe learns the biggest threat lies within the very people he’s trying to protect.

As reality breaks down and dangers multiply, Tobe must uncover the hidden agenda of one of the survivors... and keep the others safe from something lurking in the darkness.

Something that is hunting them all.

If they are to survive the night, Tobe must face the horrifying truth—that nothing is as it seems, and that they are all part of a larger plan, part of someone else's unfinished business...

I downloaded SLITHERS for my Nook, attracted by the premise, the cover, and the price ($1.99). I always love a good horror novel. This one is pretty short, and the pace was quick. Got right to the action. Writing drew me in right away.

Five friends on their way to a late night party get side-swiped by a semi-truck. Their car totaled, the five, plus two hitchhikers they picked up earlier, start walking toward the nearest gas station for help. But nothing is right. The stars, the forest, the sounds in the air, the texture of the rain, the absence of people, the giant bugs.

Things really take a bad turn when they discover the truck driver, whose body ruptures emitting some strange new creature. After that, all that is on their minds is survival.

SLITHERS, for most of the book, seriously satisfies. The author knows how to write, how to hook a reader's attention and hold it tight. I had a hard time putting this book down.

Unfortunately, as happens with way too many plot driven horror novels, the end kind of fell apart. Well, not so much fell apart as got garbled and confusing. What was a pretty gorey, terrifying ride trying to escape human-devouring monsters suddenly transformed instead into some weird time-travel, other-dimension journey that took way too much explaining on the author's part for me to completely grasp. It was a clever twist, I'll give him that, but the execution felt rushed and mind-numbing. Overall, the satisfaction I felt through 3/4 of the book dissipated by the last couple of chapters. I was truly sorry it didn't quite deliver because Mortensen is a great writer, enough so that I might still take a gamble on his earlier book, EIGHT.