THE GIFTS OF THE WISE MEN 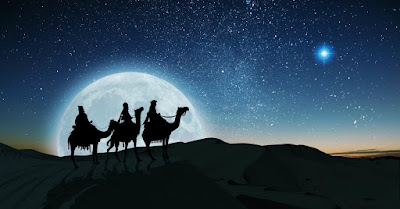 Christmas is a time of giving and receiving gifts, but few stop to consider what the tradition represents. The first gifts of Christmas are thought to have been given by the Magi, wise men from the East who followed a new star to worship the baby Jesus (Matthew 2:1-2). Tradition claims there were three Magi, but the scriptures do not specify the actual number. In fact, there were probably more than three, or at least the Magi (however many there were) were likely accompanied by a huge entourage. When they arrived in Judea, there was nothing secret about their appearance. In fact, they were rather audacious. They marched right up to King Herod’s palace and demanded to know the location of “he who was born King of the Jews” (vs. 2). The Bible says that King Herod was troubled “and all of Jerusalem with him” (v. 3).

If there were only three men visiting from some far orient land, Herod would probably have had them killed. Instead he was troubled, not only by the presence of these Magi in his court, but also by their pronouncement that the rightful heir to Herod’s Roman-bestowed crown had been born and was living somewhere within his region.

Who were these Magi, and why is their story so significant to us today?

While no one knows for certain who they were, since the Bible does not identify them except to say they came from the East, many historians believe they came from Persia, today’s Iraq, and were of the same order as the ancient Babylonian Magi of whom the prophet Daniel (a transplant from Jerusalem) eventually became leader. Those Magi were not only court “magicians”, they also had the authority to crown a man king. Daniel had prophesied when the Jewish Messiah would be born and that a new star would appear as a sign. Could it be that for six hundred years, the Magi and their descendants had anticipated the fulfillment of Daniel’s prophesies, and understood their significance to the Jewish people?

Throughout Israel’s history, Babylon had been a constant threat. The great Persian empire had conquered Israel on several occasions. So, when an entourage of Magi and possibly soldiers (why would revered holy men travel such a great distance without protection?), it would only be natural that King Herod and all Jerusalem would be worried. But to Herod’s relief, they had not come to attack Israel, but only to worship its new king. The announcement was an intentional insult. They knew and Herod knew he had no right to his power except for what the Romans had given him.
From the start of their visit, Herod began plotting the demise of this infant king. After he demanded of his own priests and scribes to locate the baby, he privately coaxed the Magi to return to his palace once they had found him, so Herod could worship him also (vs. 4 – 8). Later, after the Magi returned to their own land by another way, and Joseph and Mary had fled with Jesus to Egypt, Herod commanded that all children under the age of two years were to be killed (vs. 12-16) in order to protect his throne from any possible usurper.

But before the slaughter and the clandestine escape, the Magi found their king and bestowed upon him three gifts: gold, frankincense, and myrrh (vs. 11). Why these three gifts? Remember that these Babylonian wise men were king-makers. They also had inherited the prophesies of Daniel and knew of the coming of the Messiah. In other words, they understood who this little baby was and what he would mean to the world.

So, they gave him gold, a gift fit for a king, the boy who was a literal descendant of King David and who might have laid claim to the throne had Israel not been occupied by Rome at the time.
They gave him frankincense, a priceless fragrant resin traditionally used in embalming to help mask the smell of decay. This gift was a recognition of Jesus’ forthcoming sacrificial death.

Finally, they gave him myrrh, an ingredient in Jewish holy oil used to anoint both High Priests in the temple and kings. This gift was an emblem of Jesus’ divinity, given to Him who was “the great High Priest” (Hebrews 4:14) and Son of God.

These gifts given by the wise men were more than just gifts. They were the Magis’ witness to the royalty and divinity of Jesus, and of the sacrifice he would one day make for mankind. Today’s tradition of giving gifts should remind us what Christmas is all about. It’s not about our gifts, but about the greatest gift ever given: “For God so loved the world that He gave His only begotten son, that whosoever should believe on Him should not perish but have everlasting life” (John 3:16).
May you cherish the gifts you give and receive this Christmas, and take a moment to reflect on Him who gave all.

Merry Christmas.
Posted by Laurisa White Reyes at 5:00 AM