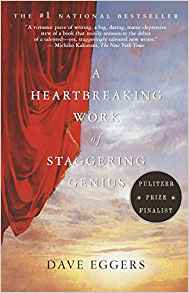 A book that redefines both family and narrative for the twenty-first century. A Heartbreaking Work of Staggering Genius is the moving memoir of a college senior who, in the space of five weeks, loses both of his parents to cancer and inherits his eight-year-old brother. Here is an exhilarating debut that manages to be simultaneously hilarious and wildly inventive as well as a deeply heartfelt story of the love that holds a family together.

I started reading this on my adult son's recommendation. He read it in college and has been raving about it ever since, and now I know why.

Dave Eggers' memoir is indeed heartbreaking and genius. His mother and father both died of cancer within a month of each other leaving him, a 20-year-old college student, in charge of raising is 8-year-old brother, Toph.

The story is a stream-of-consciousness journey into the heart and mind of a young man trying to be both parent and brother while also navigating romantic relationships, running a magazine, and just trying to live a normal life, which just doesn't seem possible for the guy.

A Heartbreaking Work of Staggering Genius is sometimes a tragedy, other times a comedy. Often it's both at once. It's a long read, with a few sections that go on and on forever, but overall it's a unique and unforgettable story that will stick with you for years once you've read the last page.