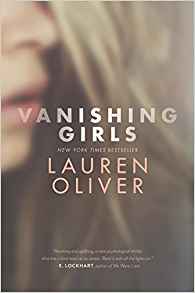 Dara and Nick used to be inseparable. But that was before the accident that left Dara's beautiful face scarred and the two sisters totally estranged.

When Dara vanishes on her birthday, Nick thinks Dara is just playing around. But another girl, nine-year-old Madeline Snow, has vanished, too, and Nick becomes increasingly convinced that the two disappearances are linked.

Now, Nick has to find her sister—before it's too late.

In this edgy and compelling novel, Lauren Oliver creates a world of intrigue, loss, and suspicion as two sisters search to find themselves, and each other.

Hard-to-put-down psychological mystery of two sisters always passing in the night, one a wild girl living on the edge, the other a straight-laced "good" girl who always covers for the other.

I can't say much for fear of giving it away, but I figured it out from the first chapter. But aside from that, the book is highly compelling and forces you to keep turning pages. My only real complaint is that Dara is the cliche bad girl. I would have liked to see more depth to her. Also, the plot was a little loose, various elements appearing out of nowhere. Otherwise, Vanishing Girls is a thrilling ride.