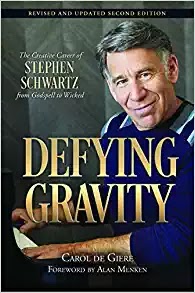 
Stephen Schwartz is among the rare American composer-lyricists whose Broadway musicals have inspired passionate followings, resulting in blockbuster hits like WICKED, GODSPELL, and PIPPIN. In the revised and updated second edition of DEFYING GRAVITY, biographer Carol de Giere reveals how Schwartz's beloved musicals came to life, adding four new chapters that shed light on the continuing WICKED phenomenon and exciting projects that include stage adaptations of THE HUNCHBACK OF NOTRE DAME with Alan Menken and THE PRINCE OF EGYPT.

A popular feature of the first edition remains intact for the second: the story of Schwartz's commercially unsuccessful shows, how he coped, and how he gave himself another chance. The new edition also features an acclaimed series of Creativity Notes with insights about the creative process. WICKED enthusiasts are treated to a revealing, in-depth account of the show’s evolution that takes readers from developmental workshops, to the pre-Broadway tryout in San Francisco, through the arguments over changes for Broadway, and finally to productions around the world.

The abundance of behind-the-scenes stories in this Stephen Schwartz biography came by way of the author’s unprecedented access to this legendary songwriter for interviews. She also drew from conversations with his family members, friends, and colleagues (librettists, composers, directors, producers, and actors) to render a rich portrait of this complex and gifted artist. She rounds out the book with photographs, Schwartz’s handwritten notes, and highlighted quotations.

Performers and others involved in productions of GODSPELL, PIPPIN, CHILDREN OF EDEN, WORKING, RAGS, and THE HUNCHBACK OF NOTRE DAME will discover the intentions of the shows' creators. Singers, writers, fans, and anyone interested in the development of stage and film musicals will enjoy multiple insights from this backstage journey, from GODSPELL to WICKED, and beyond.

I have to preface this review with the fact that I am a HUGE Broadway fan. No, I've never been to New York, but I catch as many shows as I can here in Los Angeles, and WICKED is one of my favorite shows ever.

I saw it for the third time in November at the lovely historical Pantages in Hollywood where I picked up a copy of Steven Schwartz's biography. It's a hefty book, so it's taken me a while to make my way through it, but it has been worth the journey.

The first half of the book gives us a look at Schwartz's career as a composer and lyricist from college through his stint with Disney and Dreamworks, which is an amazing tale by itself. But the rest of the book is all about WICKED, which was and still is the pinnacle of Schwartz's achievements. Schwartz is now 70+ years old (and still going strong), and WICKED is in its 15th year on Broadway. Pretty impressive.

But more impressive is the story behind the story, the years of hard work, and disappointments, and triumphs, and sacrifices that made the musical the huge international success it is today. For me, reading this book renewed me with hope. At fifty, I sometimes feel like a failure. But Schwartz hit his prime at fifty-five and is still doing amazing things. His life has infused me with renewed enthusiasm for my own future.

Plus it is just really cool to learn everything about behind-the-scenes of the show and its cast, and especially how the music and book came into behind. It revealed to me that what those of us who love the show consider perfection took years and years to get right.

DEFYING GRAVITY is simply a remarkable book about a remarkable man and his creations. Six out of Five Stars!!!