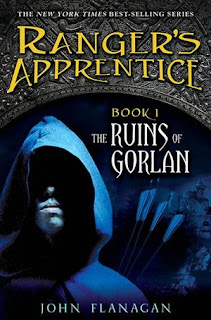 Summary (from Amazon): He had always wanted to be a warrior. The Rangers, with their dark cloaks and shadowy ways, made him nervous. The villagers believe the Rangers practice magic that makes them invisible to ordinary people. And now fifteen year-old Will, always small for his age, has been chosen as a Ranger’s apprentice. What he doesn’t realize yet is that the Rangers are the protectors of the kingdom. Highly trained in the skills of battle and surveillance, they fight the battles before the battles reach the people. And as Will is about to learn, there is a large battle brewing. The exiled Morgarath, Lord of the Mountains of Rain and Night, is gathering his forces for an attack on the kingdom. This time, he will not be denied . . . .


Review:  I went to my local book store three times over several months trying to get my hands on a copy of this book. Finally, they got a single paperback copy on the shelf and I snatched it up. This series is a blockbuster one, with ten titles and millions of copies sold world wide -- and this all just in the past five years! I had to see what all the fuss is about. While, in all honesty, it didn't grab me on page one, I did find the main characters Halt and Will quite likable. Book one sets up the rest of the series, giving us a clear view of each character's personality, strengths and weaknesses. There are several tense action scenes, with just a hint of the supernatural. I liked it enough to want to buy book 2 and see where this story takes me. The way I see it, millions of fans can't be wrong. Oh, and I absolutely LOVE the website!!!