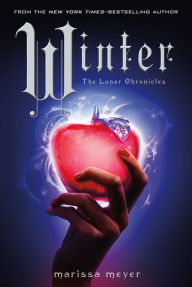 
Princess Winter is admired by the Lunar people for her grace and kindness, and despite the scars that mar her face, her beauty is said to be even more breathtaking than that of her stepmother, Queen Levana.

Winter despises her stepmother, and knows Levana won't approve of her feelings for her childhood friend--the handsome palace guard, Jacin. But Winter isn't as weak as Levana believes her to be and she's been undermining her stepmother's wishes for years. Together with the cyborg mechanic, Cinder, and her allies, Winter might even have the power to launch a revolution and win a war that's been raging for far too long.

Can Cinder, Scarlet, Cress, and Winter defeat Levana and find their happily ever afters? Fans will not want to miss this thrilling conclusion to Marissa Meyer's national bestselling Lunar Chronicles series.


Marissa Meyer's The Lunar Chronicles is my favorite series of all time! It was sheer torture waiting a year between books. This fifth and final installment follows Cinder and all her cohorts into rebellion against evil Lunar Queen Levana and her sinister thamauturge Aimery. We become better acquainted with Winter, Levana's delicate, kind, and beautiful niece who becomes instrumental in Cinder's efforts to reclaim her throne.

Winter, like all the books in the series, is packed with adventure, romance, humor, and compelling characters that truly make you fall in love over and over again. While all the romantic couples in the series are endearing, my favorite is Wolf and Scarlett. Go Team Wolf!!!

It is so hard to believe that after loving The Lunar Chronicles for four years, it has come to an end. Nooooo!!!!!! Winter brings the entire story to a satisfying and smile-inducing end. And if you haven't read Cinder, the first book in the series, yet...what are you waiting for???

Violence: High
Profanity: None
Sexuality: Mild
Posted by Laurisa White Reyes at 12:00 AM