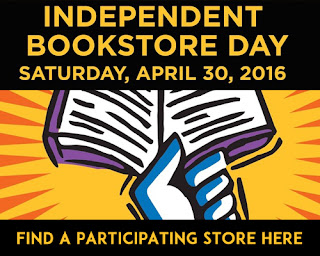 It is also INDIE BOOKSTORE DAY!!! So, today is the perfect day to run to your local bookstore and purchase an honest to God, real book to support independent businesses and keep them open! Learn more here: http://www.indiebookstoreday.com/

In recognition of both of these events, I'd like to suggest some diverse books for kids that are worth plunking down your dollars for. Enjoy!

Every Sunday after church, CJ and his grandma ride the bus across town. But today, CJ wonders why they don't own a car like his friend Colby. Why doesn’t he have an iPod like the boys on the bus? How come they always have to get off in the dirty part of town? Each question is met with an encouraging answer from grandma, who helps him see the beauty—and fun—in their routine and the world around them.

Ten-year-old Manami did not realize how peaceful her family's life on Bainbridge Island was until the day it all changed. It's 1942, after the attack on Pearl Harbor, and Manami and her family are Japanese American, which means that the government says they must leave their home by the sea and join other Japanese Americans at a prison camp in the desert. Manami is sad to go, but even worse is that they are going to have to give her and her grandfather's dog, Yujiin, to a neighbor to take care of. Manami decides to sneak Yujiin under her coat and gets as far as the mainland before she is caught and forced to abandon Yujiin. She and her grandfather are devastated, but Manami clings to the hope that somehow Yujiin will find his way to the camp and make her family whole again. It isn't until she finds a way to let go of her guilt that Manami can reclaim the piece of herself that she left behind and accept all that has happened to her family.

In this follow-up to the Newbery-winning novel THE CROSSOVER,  soccer, family, love, and friendship, take center stage as twelve-year-old Nick learns the power of words as he wrestles with problems at home, stands up to a bully, and tries to impress the girl of his dreams. Helping him along are his best friend and sometimes teammate Coby, and The Mac, a rapping librarian who gives Nick inspiring books to read.

Basanta, an Indian girl balanced on the edge of childhood and young adulthood, narrates Zia’s second novel (after The Garden of My Imaan) with a vivacious voice. She lives in a hut in a small village with her parents and younger sister, begrudgingly working alongside her mother at the “Big House” as a servant. A keen observer, Basanta views the world as rich with imagery; her employer’s privileged daughter, Little Bibi, can be “fiery as a mango pickle,” while a jamun tree “rained down fat berries that splattered the ground with purple.” After finding a lost ring belonging to Little Bibi, Basanta decides to keep it for herself. Guilt gives her a “worried heart,” and she slowly matures, using her good fortune to help less fortunate friends who often go hungry.

Manuela had imagined that killing a manatee would be like killing a very big fish, just more exciting. But when her father successfully harpoons one, leaving its baby orphaned, she finds that her feelings have changed. She vows to rescue the baby manatee and return it to the river. But she soon realizes what an enormous task she’s taken on. Will she be able to save the baby manatee—and protect him from being hunted in the future, too?
Posted by Laurisa White Reyes at 12:00 AM