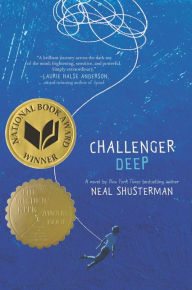 Caden Bosch is on a ship that's headed for the deepest point on Earth: Challenger Deep, the southern part of the Marianas Trench.

Caden Bosch is a brilliant high school student whose friends are starting to notice his odd behavior.

Caden Bosch is designated the ship's artist in residence to document the journey with images.

Caden Bosch pretends to join the school track team but spends his days walking for miles, absorbed by the thoughts in his head.

Caden Bosch is split between his allegiance to the captain and the allure of mutiny.

I've been a fan of Neal Shusterman for years. His dystopian novel, Unwind, still haunts me. I picked this book up at a writers conference recently where Mr. Shusterman gave one of the keynote addresses. He spoke about his teenage son's spiral down into mental illness and how their family took that journey into the deep with him. Having two teens of my own who have successfully battled forms of mental illness, I understood what he was talking about.

Challenger Deep is powerful and heartfelt. Both of Caden's worlds--the real world of the psychiatric hospital and his imaginative ocean voyage--are equally detailed and memorable. As readers, we are on this journey with Caden. We hurt when he hurts. We are afraid when he is afraid. Shusterman has created an important book, one that takes us inside a broken mind and allows us to understand what it's like to be Caden Bosch. And the result is greater compassion on our part.

Profanity:  None
Sexuality:  None
Violence:  None (brief mention of a suicide attempt)

Posted by Laurisa White Reyes at 7:12 AM