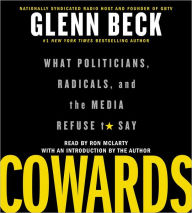 As we approach the most important presidential election in America’s history, something has been lost among all of the debates, attack ads, and super- PACs—something that Americans used to hold in very high regard: THE TRUTH.

Glenn Beck likes to say that “the truth has no agenda”—but there’s another side to that: people who have agendas rarely care about the truth. And, these days, it seems like everyone has an agenda. The media leads with stories that rate over those that matter. Politicians put lobbyists and electability over honesty. Radicals alter history in order to change the future.

In Cowards, Glenn Beck exposes the truth about thirteen important issues that have been hijacked by deceit. Whether out of spite, greed, or fear, these are the things that no one seems to be willing to have an honest conversation about. For example:

* How our two-party POLITICAL SYSTEM often leaves voters with NO GOOD OPTIONS.
* How extremists are slowly integrating ISLAMIC LAW into our SOCIETY.
* How PROGRESSIVE “religious” leaders like JIM WALLIS are politicizing the Bible.
* How the CARTEL VIOLENCE on our border is FAR WORSE than people realize.
* How “LIBERTARIAN” has been INTENTIONALLY turned into a DIRTY WORD.
* How GEORGE SOROS has amassed enough MONEY and POWER to INFLUENCE entire ECONOMIES.

In some cases, the truth is out there, but people simply don’t want to hear it. It’s much easier, and certainly a lot more convenient, to keep our blinders on. After all, as a quote attributed to President James Garfield made clear, “The truth will set you free, but first it will make you miserable.”
Miserable or not, the truth can no longer be something we hope for; it must be something we live. When courage prevails, cowards do not—and this book was written to ensure that’s exactly what happens.

I didn't know what to expect when I began listening to Cowards. I'm not a huge fan of Glenn Beck. Though I am politically conservative, I don't spend much time listening to talk radio. But the audio CD was lying around my house and I needed something to listen to, so I popped it into my car stereo. Boy, was I in for a shock.

First of all, this books isn't just for conservatives or Republicans. It isn't written as a politically biased rant. This is, instead, a well-researched and documented dissection of the seediest, ugliest parts of American politics, economics, and moralism (or lack thereof). Beck really put himself out on a limb to reveal the truth behind America's drug problem, the Clinton machine, Islamic influence throughout the world, and more. The book was startling, to say the least, but the more I listened, the more I realized how right Beck is. America is literally under siege and the only people who can free it is us, the American people. The problem is that too many of us have been deceived and are listening to the wrong voices. The result has been a gradual loss of personal liberty, and we're not even paying attention. Kind of like a frog in a slowly boiling pot of water.

I don't really know how to stop it, or if it can be stopped. Beck doesn't offer a lot of solutions. Maybe there aren't any. But the first step is becoming aware of what's going on around us, and that is what Cowards achieves. I strongly recommend this book no matter what political party with which you affiliate. This book is a must read.

Posted by Laurisa White Reyes at 8:17 AM