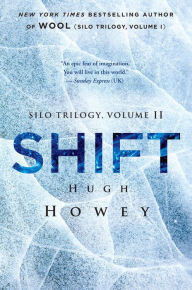 In 2007, the Center for Automation in Nanobiotech (CAN) outlined the hardware and software platforms that would one day allow robots smaller than human cells to make medical diagnoses, conduct repairs, and even self-propagate. In the same year, the CBS network re-aired a program about the effects of propranolol on sufferers of extreme trauma. A simple pill, it had been discovered, could wipe out the memory of any traumatic event. At almost the same moment in humanity’s broad history, mankind discovered the means for bringing about its utter downfall. And the ability to forget it ever happened. This is the second volume in the New York Times best-selling Wool series.

I loved Wool. That book completely blew my mind. Shift is the prequel, explaining how humankind ended up below ground for hundreds of years and why. Shift follows the stories of several characters over centuries of time, but one in particular was there from beginning to end. As he peels back the layers of deceit that literally entomb the human race, what he discovers about the motives and the methods of the silos claws at his conscience and compels him to search for the way out.

Hugh Howey is a brilliant author. The world of the silos is so complex, so intricate and descriptive I could swear it was real. Every time I opened the cover, I was immediately absorbed by that world and wanted to go back again and again. Can't wait to read the final book of the trilogy, Dust.