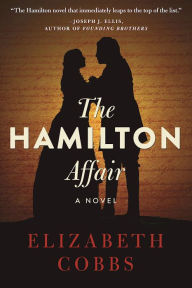 Set against the dramatic backdrop of the American Revolution, and featuring a cast of legendary characters, The Hamilton Affair tells the sweeping, tumultuous, true story of Alexander Hamilton and Elizabeth Schuyler, from passionate and tender beginnings to his fateful duel on the banks of the Hudson River.

Hamilton was a bastard and orphan, raised in the Caribbean and desperate for legitimacy, who became one of the American Revolution’s most dashing—and improbable—heroes. Admired by George Washington, scorned by Thomas Jefferson, Hamilton was a lightning rod: the most controversial leader of the new nation. Elizabeth was the wealthy, beautiful, adventurous daughter of the respectable Schuyler clan—and a pioneering advocate for women. Together, the unlikely couple braved the dangers of war, the perils of seduction, the anguish of infidelity, and the scourge of partisanship that menaced their family and the country itself.

I recently became enamored by the Tony Award winning musical HAMILTON. Shortly thereafter, I was browsing for audio books in Barnes & Noble and spotted Elizabeth Cobbs' historical novel, THE HAMILTON AFFAIR. I knew very little about our nation's founding father, Alexander Hamilton, other than he was shot and killed in a duel with Aaron Burr. So I figured, why not?

I learned a lot about Hamilton from this book. I also learned a great deal more about the early years of our great nation, The United States of America, and the political turmoil that existed even then. By the end of the book, I had grown to respect the man Hamilton and his contributions to democracy and our single united country, which may have become something very different if not for him and several other prominent early leaders.

As a novel itself, however, THE HAMILTON AFFAIR started off a little slow. It naturally begins with Hamilton's youth. Told from both his point of view and the point of view of his wife, Elizabeth, the story at times lags. At other times, the story leaps over years of history with only a cursory mention. I recognize that writing an accurate historical yet fictional portrayal of such well know figures must be a daunting task, I just wish it was a tad more interesting. In defense of the book, though, part of why the story felt sluggish was the narration. I listened to this on audio CD, and the narrator lacked enthusiasm. So it was probably a combination of the text and the narration.

Overall, the book succeeded in its aim, which I believe was to inform the reader about Hamilton's life in a format that was more engaging than a textbook. Is it worth reading? Absolutely. I'm so glad I invested nine hours to listen to it. Worth the $10 I paid for it.