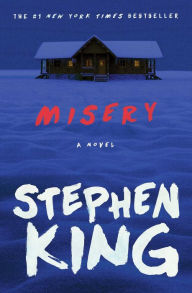 Bestselling novelist Paul Sheldon thinks he’s finally free of Misery Chastain. In a controversial career move, he’s just killed off the popular protagonist of his beloved romance series in favor of expanding his creative horizons. But such change doesn’t come without consequences. After a near-fatal car accident in rural Colorado leaves his body broken, Paul finds himself at the mercy of the terrifying rescuer who’s nursing him back to health—his self-proclaimed number one fan, Annie Wilkes. Annie is very upset over what Paul did to Misery, and demands that he find a way to bring her back by writing a new novel—his best yet, and one that’s all for her. After all, Paul has all the time in the world to do so as a prisoner in her isolated house...and Annie has some very persuasive and violent methods to get exactly what she wants...

MISERY by Stephen King was first published in 1987. And everyone knows about this story, right? If not from the book, then from the 1990 film starring Kathy Bates. So why bother posting a review here?

Believe or not, until I picked up a copy of MISERY a few months back, I had never read a Stephen King novel. I know. Shocking. But he is the master of horror and suspense, and over the past couple of years I've been writing a horror novel of my own and I really wanted to know what makes King so great. What is it about his writing that has elicited such fierce loyalty from millions of fans the world over, loyalty that has lasted for decades and more publications than I care to count? What is his secret?

I learned that King deserves all the accolades he gets. Every single one of them. I learned that he hooks readers not by surprising them, but by telling them up front what horrible things are going to happen and then dragging out every agonizing moment, making us wait for it!

MISERY is a masterpiece! I could not put it down. Loved every page. It was deliciously terrifying and gruesome. I could totally read it all over again. I did make the mistake of actually watching the film once I'd finished the book. What a disappointment. Yes, Kathy Bates is amazing as Annie Wilkes, the crazed, serial killer nurse, but why the heck did the movie makers NOT go all the way? I mean, there are so many gory, terrifying moments in the book that would have been amazing on screen! Having never seen the movie before, I really expected to see them. Can't say them here in case you haven't read the book yet. But instead showing what Annie does in the book, which is so over the top and insane, the movie played it safe. Annie breaks the guy's feet. She shoots the cop. If you've seen the movie but haven't read the book, for heaven sake, read the dang thing! You'll never be the same again!

One of the best books I've read in a long time. Not since the HANNIBAL LECTER series have I enjoyed death and torture so much.