BOOK REVIEW: I AM NOT A SERIAL KILLER by Dan Wells 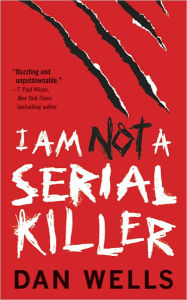 John Wayne Cleaver is dangerous, and he knows it.

He's spent his life doing his best not to live up to his potential.

He's obsessed with serial killers, but really doesn't want to become one. So for his own sake, and the safety of those around him, he lives by rigid rules he's written for himself, practicing normal life as if it were a private religion that could save him from damnation.

Dead bodies are normal to John. He likes them, actually. They don't demand or expect the empathy he's unable to offer. Perhaps that's what gives him the objectivity to recognize that there's something different about the body the police have just found behind the Wash-n-Dry Laundromat---and to appreciate what that difference means.

Now, for the first time, John has to confront a danger outside himself, a threat he can't control, a menace to everything and everyone he would love, if only he could.

My daughter has been raving about Dan Wells' series for years. John Wayne Cleaver is a sociopath teenager who struggles to keep his inner monster under control. In the first book of the series, John becomes obsessed with the gruesome murders happening in his home town and is, at first, convinced they are being stalked by a serial killer, something he knows more about than most "normal" people.

But when he witnesses one of the murders and discovers that the criminal isn't completely human, John decides to go to war with the monster, partly to protect any future victims from harm, but also to satiate his own monster within.

I avoided reading I AM NOT A SERIAL KILLER for a long time because, well, I thought it was about a teenage serial killer, and that isn't really my cup of tea. Boy, was I wrong. This book was amazing! I NEVER read books in two days, but this one set a new record for me because I honestly could not put it down. The characters are brilliant, the plot unusual and unique, the villain complex and more human than even the protagonist.

The moment I read the last page, I grabbed book 2, MR. MONSTER, off my daughter's shelf and dove right in. Wells' book is a tantalizing journey into the psyche of a sociopath with a conscience, and a monster with a heart.