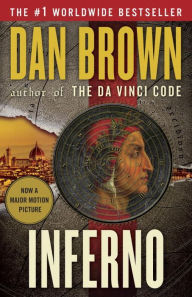 Harvard professor of symbology Robert Langdon awakens in an Italian hospital, disoriented and with no recollection of the past thirty-six hours, including the origin of the macabre object hidden in his belongings. With a relentless female assassin trailing them through Florence, he and his resourceful doctor, Sienna Brooks, are forced to flee. Embarking on a harrowing journey, they must unravel a series of codes, which are the work of a brilliant scientist whose obsession with the end of the world is matched only by his passion for one of the most influential masterpieces ever written, Dante Alighieri's The Inferno.

I've read all of Dan Brown's books, and my favorite is still ANGELS & DEMONS. I did like INFERNO as well. Like the other titles in this series, symbologist Robert Langdon is unwittingly drawn into a life or death race to interpret a sinister message before it's too late. This time, Langdon wakes up with amnesia, apparently already involved in trying to solve a mystery surrounding Dante's famous poem and a plot to destroy a third of the human race.

While the book lacked the intensity and gore of ANGELS & DEMONS, it did keep me turning pages. At times I thought I had everything figured out, but then another twist would prove me wrong. Brown is the master of cliffhangers. INFERNO is a worthy addition to Brown's lexicon, a thrilling romp through Florence & Venice, Italy, and a masterful lesson in art and historical literature. Not only is the book fun to read, but it is, as are all Brown's books, enlightening.

Profanity:  Mild
Sexuality:  None
Violence:  High
Posted by Laurisa White Reyes at 7:00 AM