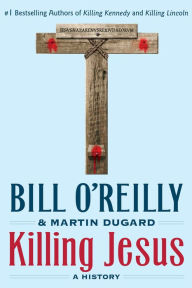 Millions of readers have thrilled to bestselling authors Bill O'Reilly and historian Martin Dugard's Killing Kennedy and Killing Lincoln, page-turning works of nonfiction that have changed the way we read history.

Now the anchor of The O'Reilly Factor details the events leading up to the murder of the most influential man in history: Jesus of Nazareth. Nearly two thousand years after this beloved and controversial young revolutionary was brutally killed by Roman soldiers, more than 2.2 billion human beings attempt to follow his teachings and believe he is God. Killing Jesus will take readers inside Jesus's life, recounting the seismic political and historical events that made his death inevitable - and changed the world forever.

O'Reilly has written a series of books like this, Killing Lincoln, Killing Kennedy, Killing Reagan. I haven't read the others yet, so I was expecting some unique insights into the death of Jesus, something I didn't know already. While Killing Jesus is an evocative narrative of the life and death of the most famous man in history, it was little more than that--his story. O'Reilly does delve into historical details of the Roman and Jewish leaders who were involved, including Herod, Ciaphas, and Pontias Pilate, as well as some who were only barely connected, like Ceasar and Tiberius. I am certain O'Reilly and Dugard did their homework, but there was nothing here I didn't already know from reading the Bible and from my basic knowledge of Ancient Roman history. Also, some of their details (such as claiming Mary Magdelene was a prostitute) are clearly taken from common assumption than from expert Biblical resources.

If you're looking for a contemporary re-telling of Jesus' life, then O'Reilly's is an excellent choice. The narrative is modern and provides plenty of description to pique a reader's interest. For someone not already familiar with the New Testament, this would be a good introduction to it. However, for those who are devout in the faith, as I am, this book may leave you feeling disappointed. I was honestly expecting more, especially about why and how the death of Jesus affected the world the way it has.

O'Reilly does add some information at the end about Jesus's twelve apostles and their eventual fates, which was interesting, but again, while not mentioned in the Bible, most Christians are already familiar with these stories. So I have to say that the book would be more valuable for someone unfamiliar or at least not well-versed with the history of Christ. Otherwise, for me, it was just another Jesus story.

Posted by Laurisa White Reyes at 4:00 AM