SEER OF THE GUILDE available NOW! 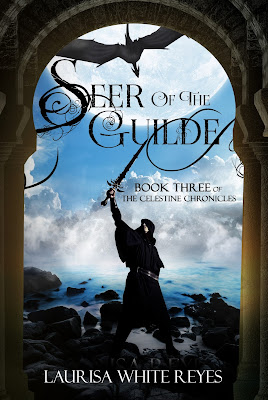 SEER OF THE GUILDE
The Celestine Chronicles, Book 3
Skyrocket Press
Ages 10 & up


IN THE THIRD installment of The Celestine Chronicles, novice enchanter Marcus Frye sets out to rescue his mother, Ivanore, from the clutches of her arch enemy, Chancellor Prost, now the self-proclaimed leader of the Vatéz. With the help of new allies and old friends, Marcus embarks on his most dangerous quest yet. The fate of his family and the future of his entire kingdom depend on his victory.

I'm so excited to finally share this book with you! The Celestine Chronicles began as bedtime stories for my son, and eventually the first book in the series, The Rock of Ivanore, was published in 2012, followed by the sequel, The Last Enchanter, in 2013.

It's taken four years to get book 3 into your hands, but we are finally here! Thank you to all my young fans (and their parents) for your emails and notes of encouragement. This is for all of you.

Available for kindle and in paperback (other digital editions soon to follow), I hope you enjoy reading about Marcus's daring attempt to rescue his mother, the Lady Ivanore. Once you've read it, please post a review on Aamzon and Goodreads. I'd really appreciate it.

In the meantime, if you've been enjoying The Celestine Chronicles, you might want to check out the prequel series, The Crystal Keeper, as well.

BUY YOUR COPY ON AMAZON