BOOK REVIEW: THE HITCHHIKER'S GUIDE TO THE GALAXY by Douglas Adams 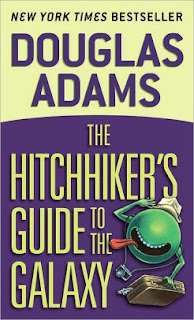 THE HITCHHIKER'S GUIDE TO THE GALAXY
Douglas Adams
Random House

Just before the Earth vanishes, Arthur is whisked away to safety by his friend Ford Prefect, who is actually an alien himself. They end up on a stolen space ship piloted by the rogue President of the Universe, Zaphod Beeblebrox, who is in search of an extinct planet long believed to be a myth.

I'm sure I must have read this decades ago, but I read this recently to my 9-year-old son. The zany story made him laugh out loud.  His often confused expression made me laugh out loud. This is one of the most clever and witty books I've ever read, but I honestly couldn't tell you what it's all about. I have no idea. It's just weird. Funny. Odd. And different than any other book that's ever been written.

If you've managed to survive this long without reading The Hitchhiker's Guide to the Galaxy, then maybe it's high time you did.