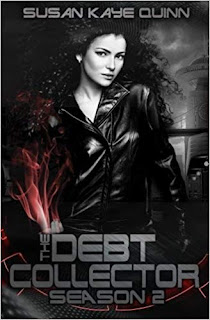 What's your life worth on the open market?

In this sexy, gritty future noir, debt collectors take your life energy and give it to someone more "worthy"... all while paying the price with black marks on their souls.

Wraith is a shadow in the night, haunting the bedrooms of the rich "high potentials" who have stolen life energy from the desperate and dying. The justice and the sweet mercy hit that follow keep her from falling into her own personal abyss. Her secret nighttime work also keeps her on level for her real mission: carrying on her father's mission to bring an end to debt collection as a whole. But when a mysterious debt collector interrupts her in the act and discovers her secret, everything Wraith loves may be destroyed by the one thing she can never fix--the original sin of being a debt collector herself.

Addicted! That's what I am. I'm addicted to Susan Kaye Quinn's The Debt Collector series. I read Season One: Lirium a couple of years ago and have been biting my nails ever since, waiting for the release of Season Two: Wraith.

Wraith is the daughter of an anti-collector activist tycoon who was cashed out by a debt collector. But he never knew the truth about his own daughter: that she is a debt collector too. By skin-to-skin contact she can drain the life energy from one person and give it to another. But unlike most collectors, she's a good guy. She drains from the rich and wicked and gives to the weak and needy. But her secret is about to explode wide open when she's blackmailed by Gehenna, a powerful underground league hellbent on making debt collectors all-powerful and eternal.

Wraith wants to save her own skin, but she also wants to take Gehenna down...but then she falls for its number one henchman: gorgeous, mysterious Zachariel.

Wow! Wraith really packs a punch. The story and characters immediately drew me in, and Quinn's narrative paints a vivid, absolutely believable future world where tech and life energy reign. I would love to see The Debt Collector as a Netflix original series, but the books are so engrossing, TV isn't needed.

While Wraith can stand alone, I do encourage reading Lirium as well. [Read my review HERE] I literally cannot wait for Series Three!