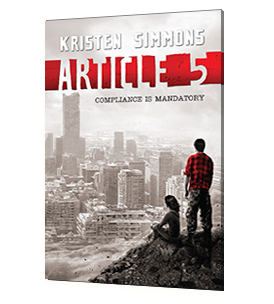 Seventeen-year-old Ember Miller is old enough to remember that things weren’t always this way. Living with her rebellious single mother, it’s hard for her to forget that people weren’t always arrested for reading the wrong books or staying out after dark. It’s hard to forget that life in the United States used to be different.

Ember has perfected the art of keeping a low profile. She knows how to get the things she needs, like food stamps and hand-me-down clothes, and how to pass the random home inspections by the military. Her life is as close to peaceful as circumstances allow
.
That is, until her mother is arrested for noncompliance with Article 5 of the Moral Statutes. And one of the arresting officers is none other than Chase Jennings…the only boy Ember has ever loved.


MY REVIEW:
A gripping read. The protagonist, Ember, faces tremendous challenges. First, her mother is arrested for being a single mom, then Ember is sent to an abusive reform school. From there, things just get tougher. I wish I could tell you everything that happens to this girl, but then I'd be giving it all away. And I just hate it when book reviews include spoilers, don't you? But this is a great example of someone who's tribulations just make them stronger.  She is a very "real" character, full of pain and emotion, but faced with the necessity to keep on going no matter what.
And I just love, love, love Chase Jennings. Now this is a hero! And a gentleman! The kind of guy us mothers wish our daughters would bring home for dinner. His love for Ember runs deep. And there is no sex of any kind in this book. Thank you, Kristen Simmons, for giving us a male protagonist with an actual concsience and moral courage, a guy who is willing to lay his life on the line to do what is right. Chase is awesome.
And the final horrible surprise shocker - won't tell you what it is - but absolutely gut wrenching. I was all tied up in knots and up until midnight reading this thing. I would say this is a near perfect story.

I have only one tiny complaint. Ember misreads Chase on many occasions, assuming things about him that simply are not true. As the reader, the truth seemed blatantly obvious to me and it was frustrating that Ember could be so dumb on that account. They kept coming together and then pushing each other away. BUT this all does get resolved in the end in a way that is satisfying and well...perfect.
Okay, Kristen Simmons - I demand a sequel!
MY RATING:  4 1/2 out of 5 stars
Violence - Moderate
Profanity - None
Sex - Mild (a little kissing, nothing more)
Posted by Laurisa White Reyes at 12:01 AM