BOOK REVIEW: A NEED SO BEAUTIFUL by Suzanne Young 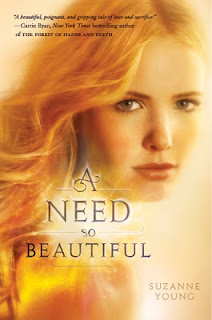 We all want to be remembered. Charlotte's destiny is to be Forgotten...

Charlotte’s best friend thinks Charlotte might be psychic. Her boyfriend thinks she’s cheating on him. But Charlotte knows what’s really wrong: She is one of the Forgotten, a kind of angel on earth, who feels the Need—a powerful, uncontrollable draw to help someone, usually a stranger.

But Charlotte never wanted this responsibility. What she wants is to help her best friend, whose life is spiraling out of control. She wants to lie in her boyfriend's arms forever. But as the Need grows stronger, it begins to take a dangerous toll on Charlotte. And who she was, is, and will become--her mark on this earth, her very existence--is in jeopardy of disappearing completely.

Charlotte will be forced to choose: Should she embrace her fate as a Forgotten, a fate that promises to rip her from the lives of those she loves forever? Or is she willing to fight against her destiny--no matter how dark the consequences?

Scroll down for my review.

I have mixed feelings about this book. I liked the overall premise. Charlotte is driven to help people despite the fact that she fights against it. Every time she helps someone, she changes a little more, is forgotten a little more. To have a power she doesn't like and wishes she didn't have is intriguing. It is a unique twist on the guardian angel idea. As those closest to her begin to forget her, the story becomes really emotional. The book itself was well-written and ended with a great hook.

There were several things about the book that bothered me, however. Charlotte's best friend and her boyfriend Harlan were a tad cliche: the snarky sidekick who loves to shop and the hot bad boy love interest. While Charlotte's friend actually has some legitimate problems of her own that give her character some depth, Harlan is the kind of guy girls should simply avoid. Every time Charlotte tells him she loves him, he tells her to prove it by having sex with him. In fact, that seems to be the only thing he's interested in through most of the book. He almost redeems himself at the end, but by then it was too late. I already didn't like him.
Having said all that, I did like A Need So Beautiful enough to consider reading the sequel, A Want So Wicked, which comes out in June. If it weren't for Harlan, I think I might have liked, even loved the book. But I don't care for teen sex in books, and I don't like boys who insist the only way a girl can prove her love is by screwing around.

My Rating:  3 1/2 out of 5 stars
Violence - Mild
Profanity - Mild
Sex - Moderate (sex does occur but is not described in detail)
Posted by Laurisa White Reyes at 12:01 AM