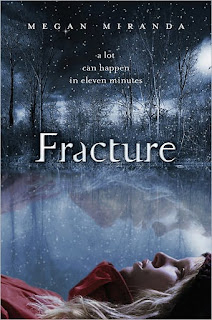 Summary:  Eleven minutes passed before Delaney Maxwell was pulled from the icy waters of a Maine lake by her best friend Decker Phillips. By then her heart had stopped beating. Her brain had stopped working. She was dead. And yet she somehow defied medical precedent to come back seemingly fine
-despite the scans that showed significant brain damage. Everyone wants Delaney to be all right, but she knows she's far from normal. Pulled by strange sensations she can't control or explain, Delaney finds herself drawn to the dying. Is her altered brain now predicting death, or causing it?

Then Delaney meets Troy Varga, who recently emerged from a coma with similar abilities. At first she's reassured to find someone who understands the strangeness of her new existence, but Delaney soon discovers that Troy's motives aren't quite what she thought. Is their gift a miracle, a freak of nature-or something much more frightening?

Review:  Fracture was everything I expected it to be. I first heard about it when the book was first announced last year and I immediately put it on my TBR list. I had the opportunity to meet the author at her signing in Pasadena, CA a few weeks back.

First off, let me say that I love Fracture's cover. It is distinctive and sets it apart from so many other YA books out there.

Second, the concept of a girl surviving eleven minutes submerged in ice cold water and being left with the ability to sense imminent death is, in and of itself, intriguing. But the author does more than that. She skillfully compels the reader to ask hard questions: Should those who suffer and who are going to die anyway be relieved of their suffering? Who has the right to make those decisions? What determines if a life, even an imperfect life, is worth living? The author does not offer any definite answers, but she makes you think. The character of Troy is neither good nor evil, or maybe he is both. He is very complex and every time I turned the page, I wondered what would happen next.

The protagonist, Delaney, was very believeable, as was Decker, her best friend. Their relationship was unpredictable and complicated, as real life relationships often are. That's what I liked best about Fracture. Beneath the fast-paced plot and nerve wracking tension was a tapestry of imperfect people with real problems. There were no easy fixes here. No tie it all up in a nice package at the end. But the end was satisfying.

I highly recommend Fracture and would run to the store and buy another Megan Miranda title if there was one. This was her debut novel, but I hope it won't be her last.