“There is one thing, which might show some commitment on your part . . .”
“Name it!” The Thane relaxed again on his spear.
“Deliver the Tail, alive, here, alone, one week from tonight.” The Wolf sat back on the grass of the meadow.
“I will send him, but you must kill him yourself. Agreed?”
The Wolf licked her chops, “Agreed.” 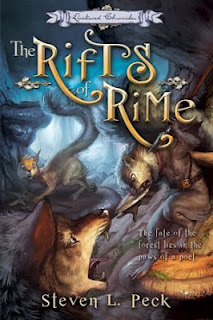 In a world overtaken by greed and a ruthless, power-hungry dictator, Pinecone knows he’s no warrior. But when he’s entrusted with the sacred Scroll of Quickening, an ancient record that holds great power, Pinecone must summon the courage to protect the scroll. If he doesn’t, its secrets will be lost forever.

Meanwhile, Pinecone’s friend Leafe is mounting a makeshift rebellion to fend off the Thane whose evil might grows stronger every day. But her efforts may force her into some troubling alliances.

This thrilling story is full of suspense, surprises, and an epic struggle of good versus evil. Steven L. Peck brings to life a richly detailed fantasy world akin to Brian Jacques’s Redwall series. A truly magical adventure any reader is sure to get lost in.


The Rifts of Rime is a middle grade fantasy adventure published by Cedar Fort. Mr. Peck is giving away (1) copy of THE RIFTS OF RIME! To enter, just fill out the Rafflecopter following the interview below. You can find more information of the author and his other books on Goodreads. 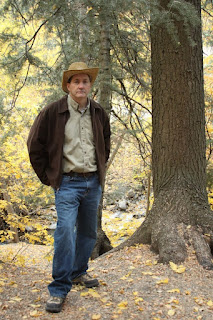 1.  Describe Rifts of Rime in one sentence.

On one level Rifts of Rime is a rollicking adventure about poetry, war, and fighting evil through small acts of courage, but at another level explores themes of friendship, faith in others, and how differences between us can make us powerful—and it's about warrior squirrels.

I'm a biologist and I remember reading Redwall with my older kids and being fairly bothered. The animals did not seem like animals at all—well there were the usual stereotypes: rats are ratty, weasels are weaseley, bears are slow but watch out when they get angry. You know the shtick. But pretty much the animals were just people literarily dressed like animals. They were using people tools and utensils. This is not a criticism per se, my kids and I loved Redwall, Wind in the Willows and other such books. But what if animals had a genuine animal culture? An animal religion? Used tools they could fashion like animals—if they used them at all?

It was in answering these questions that Rifts of Rime was born.

3.  As an author of middle grade fantasy, what books have influenced you the most?

Ok now I'm going to sound like a walking cliché, but I loved Harry Potter, Lord of the Rings (I've read it seventeen times!), Narnia, Madeleine L'Engle's books, Ursula K. Le Guin's Earthsea trilogy (and beyond). But also I've read many of the Newberry Award books. Every year for much of my life I've tried to read the winners (I'm a little behind), and once set a goal to read them all—I didn't make it, but I read over half.  Watership Down and The Secrets of N.I.M.H. were my favorite animal stories.

4.  What books are you reading now?

Actually I'm rereading Lord of the Rings—You know . . . to get ready for the Hobbit Movie coming out.

I've always loved to write, but as a biologist it's hard to be taken seriously. I've been a poet for some time (and you'll notice poetry plays a big role in Rifts of Rime). But it's been slow in coming. I had a novella called, The Gift of the King's Jeweler, published by Covenant Communications back in 2003, but only recently have I been having some successes. I think some award winning short stories, and my blogging at ByCommonConsent.com helped pave the way and three books came out within a year. An existential horror novella for adults called, "A Short Stay in Hell (a more philosophical work) and a work of magical realism called, Scholar of Moab, which was a finalist for the Montaigne Medal, a national award honoring the most thought provoking books, and which was awarded the best novel of the year (2011) by the Association for Mormon Letters (AML).

6.  What can we expect from you in the future?

Well, I've got a SciFi almost completed which I started before these successes of late and of course the other volumes in the Quickened Chronicles #1 which just let me say are going to be so fun and exciting it will knock you out of your tree. Keep your eye out; they are wildly different than anything you might expect. I believe it will redefine the entire warrior squirrel genre. :-)

One reader will receive a copy of THE RIFTS OF RIME!
All you need to do enter is fill out the Rafflecopter form below. There are plenty of chances to win!
This giveaway will end on June 4th.
Best of luck to everyone!

a Rafflecopter giveaway
Posted by Laurisa White Reyes at 1:37 PM