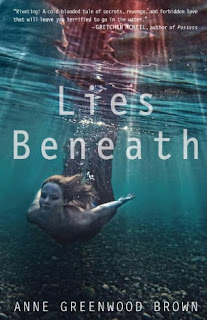 Anne Brown's debut YA paranormal novel hits the shelves tomorrow June 12th. This is a book you won't want to miss. Also, don't miss the AWESOME GIVEAWAY at the end of this post!


1.  Tell us about LIES BENEATH in one sentence. LIES BENEATH is a paranormal revenge and redemption story about Calder White, a Lake Superior merman, who falls in love with the daughter of his prey.
2.  What inspired you to write this story? Partly I was inspired by Lake Superior, which is where my dysfunctional family of merpeople live. It's the largest freshwater lake in the world (by surface area), and it is ancient, and clear, and freezing cold. I grew up sailing Lake Superior and imagining all the mysteries beneath its surface. But my main character was the evolution of another character in another Lake Superior novel I was trying to write. That character just refused to act . . . normally. When I finally let him show me what he could do, Calder White was born!
3.  What books did you enjoy reading when you were young? Nancy Drew mysteries (all of them); Anne of Green Gables; A book called The Thyme Garden, which was about time travel via an herb garden. Brilliant stuff! I get very OCD about books. When I find a book I love, I read it over and over (and over). Only when I can practically recite it do I move on.


4.  What books do you enjoy reading now? I love paranormal novels (Shiver, Nightshade, Daughter of Smoke and Bone), but I also enjoy contemporary, and I absolutely inhaled John Green's The Fault in our Stars and Elissa Hoole's Kiss the Morning Star. I love anything with a romantic edge to it, even if that's not the main theme of the story.
5.  Tell us a little about your journey to publication. It was looooonnnngggg. My problem was I was trying to be someone I wasn't and write in a voice that wasn't authentically me. For six years I wrote in every genre, except the one that came most naturally. When I finally found my place with MG/YA, I got an agent on my first query and LIES BENEATH sold in less than 5 days.


6.  What can we expect from you in the future? The sequel to LIES BENEATH will be out in the spring of 2013 (March?). My original title for the sequel got dumped, and I'm not authorized to announce the final title yet, but it is a continuation of the LIES BENEATH story told from Lily's point of view. There is a tentative plan for a trilogy, and Book 3 will alternate povs from Calder to Lily and back again. After that, I've got two or three other stories up my sleeves, but none of them are about mermaids. 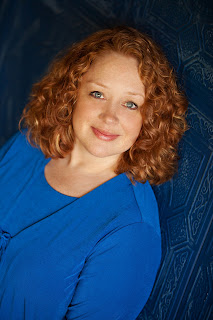 Summary from Amazon: Calder White lives in the cold, clear waters of Lake Superior, the only brother in a family of murderous mermaids. To survive, Calder and his sisters prey on humans, killing them to absorb their energy. But this summer the underwater clan targets Jason Hancock out of pure revenge. They blame Hancock for their mother's death and have been waiting a long time for him to return to his family's homestead on the lake. Hancock has a fear of water, so to lure him in, Calder sets out to seduce Hancock's daughter, Lily. Easy enough—especially as Calder has lots of practice using his irresistible good looks and charm on ususpecting girls. Only this time Calder screws everything up: he falls for Lily—just as Lily starts to suspect that there's more to the monsters-in-the-lake legends than she ever imagined. And just as his sisters are losing patience with him.
﻿
Excerpt: As a matter of context, Calder feasts on emotion, which he sees as various colors. Some colors act as lures; others repel.

She enjoyed teasing me. A trail of happy satisfaction burned like pink fire, then spun out of her like a pinwheel. It was a magnet that lured me to her. My hand involuntarily reached forward. She came closer, not realizing the motivation behind my gesture, and shocked me by weaving her fingers through mine. I watched—horrified, spellbound—as the pink shimmer crept from her fingertips, across the top of my hand and over my wrist. My forearm hummed and heated until the warmth pushed up my arm and broke across my chest, finally bursting through my lips with a sudden, surprising laugh.

To be eligible to win a copy of Lies Beneath, all you need to do is leave a comment below along with an email address so I can contact you.

This giveaway will run through June 25th.
Posted by Laurisa White Reyes at 12:01 AM