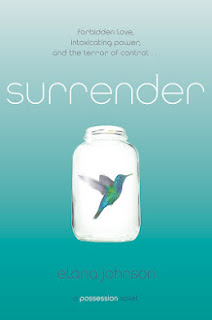 
Forbidden love, intoxicating power, and the terror of control…
Raine has always been a good girl. She lives by the rules in Freedom. After all, they are her father’s rules: He’s the Director. It’s because of him that Raine is willing to use her talent—a power so dangerous, no one else is allowed to know about it. Not even her roommate, Vi.
All of that changes when Raine falls for Gunner. Raine’s got every reason in the world to stay away from Gunn, but she just can’t. Especially when she discovers his connection to Vi’s boyfriend, Zenn.
Raine has never known anyone as heavily brainwashed as Vi. Raine’s father expects her to spy on Vi and report back to him. But Raine is beginning to wonder what Vi knows that her father is so anxious to keep hidden, and what might happen if she helps Vi remember it. She’s even starting to suspect Vi’s secrets might involve Freedom’s newest prisoner, the rebel Jag Barque…. 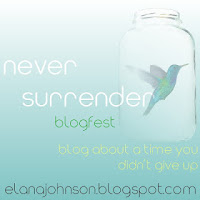 Surrender, the eagerly awaited sequel to Elana Johnson's Possession, was released on June 5th. In celebration, Johnson is hosting The Never Surrender Blogfest in which participating bloggers post about a time they didn't surrender.

As an author myself, I have to say that there were many times I wanted to surrender. I often felt discouraged along my path to publication, but thanks to friends and family who believed in me, I didn't give up. It took two years and 50 submissions to find a publisher for The Rock of Ivanore, and another three years to get it out.  It feels so good to finally be living my dream.

When is a time you didn't surrender? I'd love to hear your story in the comments below. For more information about Elana Johnson's books and the blogfest, click HERE. Please visit the other participating blogs as well. Thanks!

Email ThisBlogThis!Share to TwitterShare to FacebookShare to Pinterest
Labels: YA fiction