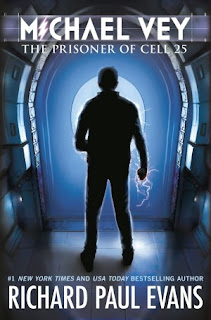 To everyone at Meridian High School, Michael Vey seems like an ordinary 14-year-old–he likes waffles and video games, hates homework and gets bullied at school. But Michael is anything but ordinary.  He was born with special electrical powers.

When Michael’s best friends, Ostin Liss and cheerleader Taylor Ridley, make an accidental discovery, the trio learns that there are other children with electric powers–and that someone, or some thing, is hunting them.

After Michael’s mother is kidnapped, Michael will have to rely on his wits, powers and friends to combat the powerful Elgen and free his mother.

Richard Paul Evans is the best-selling author of a string of feel good stories. Best known for his holiday books THE CHRISTMAS BOX and TIMEPIECE, Evans recently ventured into the world of middle grade fiction. I purchased MICHAEL VEY on compact disc so I could listen to it in my car, which I did along with my children.

Now, I have to tell you that my reaction to the story was much different than my kids' reactions. Quite simply, they ate it up. Every day they begged me to put on MICHAEL VEY again. Sometimes we'd just sit in the car in my garage so they could hear a little more of the story. They finished it during a long drive up to Salt Lake City with their dad. Both my son and daughter gave the book a very enthusiastic thumbs up.

Evans is great writer and the story had a nice, quick pace with plenty of action and intrigue. Even the premise is pretty cool - newborns in a particular hospital get zapped by a malfunctioning magnetic imaging machine and end up with varying types of electrical powers. The powers are pretty awesome and the plot kept me interested. However, the characters were all cliche'. For me, it seemed like your typical threesome - the hero, the nerdy sidekick, and the smart and pretty girl - off to save the world. My biggest complaint was that the characters were all supposed to be about 16 or 17 years old, but they all talked and behaved like 12-year-olds, which I think explains its appeal to younger kids. (It is listed for 12 & up, but I think ages 8 to 12 is more fitting.) I think I would have liked it much more if the characters had actually been 12 instead of really immature and naive teens.

Okay. Maybe I'm sounding too harsh here. Don't get me wrong. I did enjoy it enough to finish it. And I have purchased the sequel and will probably listen to it on the way to San Diego next month for our family vacation. I just wasn't in awe like I should have been with a book from such a famous author.

Now, I will say this - A huge thank you to Richard Paul Evans for a writing a book with no bad words, graphic violence or sex.

Overall, I give MICHAEL VEY: