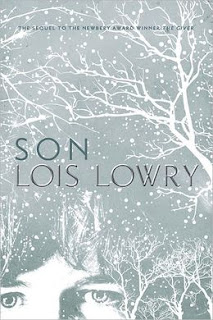 They called her Water Claire. When she washed up on their shore, no one knew that she came from a society where emotions and colors didn’t exist. That she had become a Vessel at age thirteen. That she had carried a Product at age fourteen. That it had been stolen from her body. Claire had a son. But what became of him she never knew. What was his name? Was he even alive?  She was supposed to forget him, but that was impossible. Now Claire will stop at nothing to find her child, even if it means making an unimaginable sacrifice.

Son thrusts readers once again into the chilling world of the Newbery Medal winning book, The Giver, as well as Gathering Blue and Messenger where a new hero emerges. In this thrilling series finale, the startling and long-awaited conclusion to Lois Lowry’s epic tale culminates in a final clash between good and evil.

I've been a fan of Lois Lowry's books ever since I first read The Giver many years ago. I'm always surprised when young readers tell me they've read The Giver but haven't even heard of its sequels Gathering Blue and The Messenger, both equally compelling stories. I anxiously awaited the release of SON, the story that ties all three books together and provides answers to so many questions left unanswered in the series.

Claire is a young girl of twelve when she is chosen to be a birth mother in the same community where Jonas lives in The Giver. Shortly thereafter she gives birth to a little boy who is taken from her, but unlike the other people in her village, she feels a distinct longing for her son. Her story takes her through many years, remote locations and intense challenges as she searches for her son.

While Son is not my favorite of Lowry's books, it did satisfy the curiosity I've had lingering from reading the other books. Claire is a remarkably strong character, as is her son who longs just as much to find her. I enjoyed this story, though it did feel a little long toward the end, which lacked the punch I was expecting and which makes the other books in the series so memorable. But Lowry is a master storyteller and tells Claire's story with grace and finesse.

If you read The Giver and have always wondered what happened to Jonas and Gabe, read Son. While reading The Messenger and Gathering Blue is not a necessity to enjoy this book, it would definitely help you understand some of the references to other such as Kira and Mattie.