If you participated last year, then you'll know all about it. If this is your first time, then you're in for a real treat.  SUPER SWAG SUNDAY is actually a week long event culminating in the biggest book promo giveaway ever! Every day this week, Monday June 24th through Saturday June 30th, I will be spotlighting several of today's best books for kids and teens. Blog visitors can enter the daily giveaway for a chance to win one of 6 SUPER SWAG PACKS, consisting of more than 50 promotional items including bookmarks, postcards, wristbands, stickers, jewelry, key chains, pencils, lip balm, a compass, pencils, tote bags, posters, and tons more! Many items are autographed by the authors! 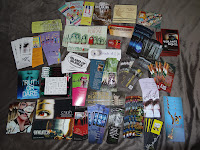 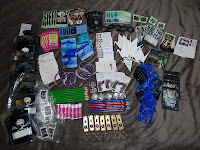 On the last day, SUPER SWAG SUNDAY, one last name will be drawn to win the MEGA SWAG PACK, which includes everything in the swag packs PLUS all of the following: signed copies of The Always War by Margaret Petersen Haddix, The Unwanteds: Island of Silence by Lisa McMann, The Scorch Trials by James Dashner, Losing It by Erin Fry, Evertaster: The Buttersmith's Gold by Adam Sidwell, Starters by Lissa Price, Hysteria by Megan Miranda, original artwork from Fishtale by Catherine Masciola, a signed Losing It water bottle, T-shirts from OyMG! by Amy Fellner Dominy and Touching the Surface by Kimberly Sabatini, a guitar pick from Send Me a Sign by Tiffany Schmidt, and a heart-shaped necklace from Love and Leftovers, a Dragonwitch pencil, a Margaret Petersen Haddix promo pin, an ARC of Monsters by Ilsa J. Bick & camo backpack, a hard copy of Quarantine by Lex Thomas, and a signed poster of The Binding Stone by Lisa Gail Green. (Some items not pictured below.) Whew! 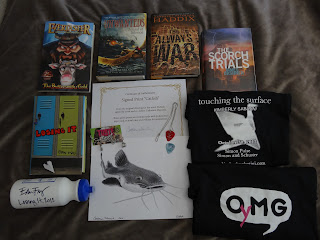 Entering the giveaways is easy! Stop by this blog each day and check out the spotlighted books. Then enter that day's rafflecopter form which includes links to the authors' Facebook and/or Twitter pages. The winner will be announced the following morning. Each day is a fresh chance to win! 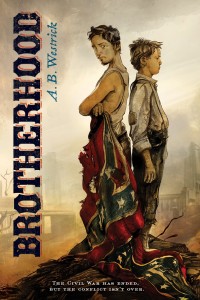 The year is 1867, and Richmond, Virginia, lies in ruins. By day fourteen-year-old Shadrach apprentices with a tailor and sneaks off for reading lessons with Rachel, a freed slave, at her school for African-American children. By night he follows his older brother to the meetings of a brotherhood, newly formed to support Confederate widows and grieving families like his. As the true murderous mission of the brotherhood—now known as the Ku Klux Klan—emerges, Shad is trapped between his pledge to them and what he knows is right. In this unflinching view of the bitter animosity that stemmed from economic and social upheaval in the South during the period of Reconstruction, it’s clear that the Civil War has ended, but the conflict isn’t over.

“A boy struggling to come of age in a ruined world reaches in all the wrong directions for being and belonging in this story that uncovers a trove of hidden history.”- Richard Peck, Newbery-winning author of A Year Down Yonder 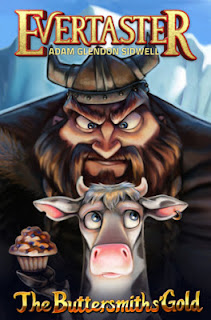 Everyone knows the most coveted treasure of the Viking Age was blueberry muffins. Blueberry muffins so succulent that if you sniffed just a whiff, you'd want a whole bite. If you bit a bite, you'd want a batch; if you snatched a batch, you'd stop at nothing short of going to war just to claim them all.

Young Torbjorn Trofastsonn comes from the clan that makes them. He's a Viking through and through, he's thirteen winters old, larger than most respectable rocks, and most of all, a Buttersmith. That's what he thinks anyway, until a charismatic merchant makes Torbjorn question his place among the muffin-makers. When Torbjorn lets the secret of his clan's muffin recipe slip, he calls doom and destruction down upon his peaceful village and forces his brother Storfjell and his clansmen to do the one thing they are ill-prepared to do: battle for their lives. 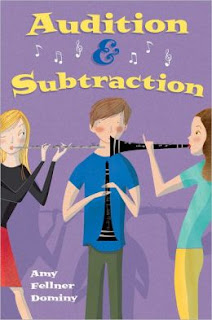 
Best friends Tatum and Lori are used to doing everything together-including a clarinet/flute duet for District Honor Band auditions. But all that changes when Michael transfers to their middle school, and into their band. Suddenly, not only is he competition for Tatum's spot on stage, but he's stealing Lori, too. Tatum doesn't like change no matter its form: not with her good friend Aaron, who seems to believe her fib that they're secretly boyfriend and girlfriend. And not with her mom either, who, to cope with a separation from her dad, is performing in community theater, of all things! Amy Fellner Dominy composes an equally heartwarming and humorous story of how holding tight to the status quo can mean missing out on the future-and how often times the best way to move forward is by going solo.

"Tatum's maturing recognition of her own self-worth and realistic outcomes--sadly not everything works out the way she would wish--make this a satisfying and believable read." - Kirkus Reviews 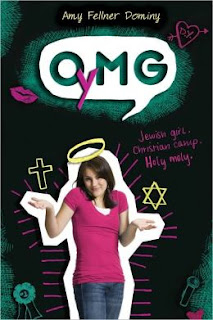 Ellie Taylor loves nothing better than a good argument. So when she gets accepted to the Christian Society Speech and Performing Arts summer camp, she's sure that if she wins the final tournament, it'll be her ticket to a scholarship to the best speech school in the country. Unfortunately, the competition at CSSPA is hot-literally. His name is Devon and, whether she likes it or not, being near him makes her sizzle. Luckily she's confident enough to take on the challenge-until she begins to suspect that the private scholarship's benefactor has negative feelings toward Jews. Will hiding her true identity and heritage be worth a shot at her dream?

Debut author Amy Fellner Dominy mixes sweet romance, surprising secrets, and even some matzo ball soup to cook up a funny yet heartfelt story about an outspoken girl who must learn to speak out for herself.

"Readers who like their frothy romance with a bracing dash of serious social issues will be clamoring for seconds." - Kirkus Reviews 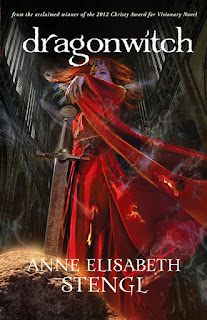 A New Tale Is Added to this Christy Award-Winning Fantasy Saga!

Submissive to her father's will, Lady Leta of Aiven travels far to meet a prospective husband she neither knows nor loves--Lord Alistair, future king of the North Country.

But within the walls of Gaheris Castle, all is not right. Vicious night terrors plague Lord Alistair to the brink of insanity. Whispers rise from the family crypt. The reclusive castle Chronicler, Leta's tutor and friend, possesses a secret so dangerous it could cost his life and topple the North Country into civil war.

And far away in a hidden kingdom, a fire burns atop the Temple of the Sacred Flame. Acolytes and priestesses serve their goddess to the limits of their lives and deaths. No one is safe while the Dragonwitch searches for the sword that slew her twice...and for the one person who can wield it. 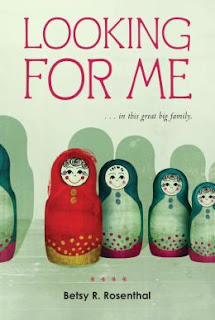 
One of twelve siblings growing up in Depression-era Baltimore, Edith isn’t quite sure of who she is. Between working at her father’s diner, taking care of her younger siblings, and living in the shadow of her more mature sisters, she feels lost in a sea of siblings. When a kind teacher encourages Edith to be a teacher herself one day, Edith sees prospects for a future all her own. Full of joy, pain, humor, and sadness, this novel in verse is an enduring portrait of one family’s pursuit of the American dream.


“Rosenthal’s spare writing superbly captures the emotional growth of a girl on the cusp of adolescence, despite its specific historical context.” – School Library Journal

Order Looking for Me 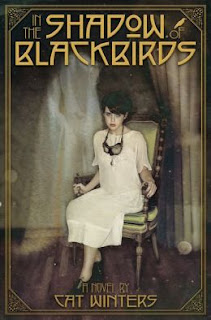 
In 1918, the world seems on the verge of apocalypse. Americans roam the streets in gauze masks to ward off the deadly Spanish influenza, and the government ships young men to the front lines of a brutal war, creating an atmosphere of fear and confusion. Sixteen-year-old Mary Shelley Black watches as desperate mourners flock to séances and spirit photographers for comfort, but she herself has never believed in ghosts. During her bleakest moment, however, she’s forced to rethink her entire way of looking at life and death, for her first love—a boy who died in battle—returns in spirit form. But what does he want from her?

Featuring haunting archival early-twentieth-century photographs, this is a tense, romantic story set in a past that is eerily like our own time.

Order In the Shadow of Blackbirds 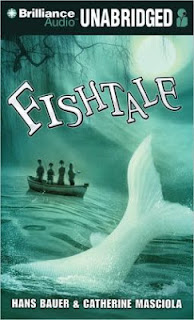 Sawyer’s family runs a catfish farm in rural Mississippi. When his widowed mom gets sick after a pond “cat” swallows her wedding ring, Sawyer is sure the missing ring is to blame. Strange clues and a local myth convince him that the pond cat has become a meal for a far more challenging catch. He sets out with two friends and his stowaway little sister to solve the secret of the ring.
Journeying deep into a remote bayou, the foursome must rely on their wits and each other to navigate the teeming swamp, outsmart a sneaky poacher, and overcome their differences in pursuit of a colossal catfish. But this is no ordinary fish. This is Ol’ One Eye — the biggest, oldest, smartest, and meanest darn cat that ever swam the Yazoo River! And before long, the adventurers aren’t sure who is chasing who.

"A persuasive Southern dialect, bits of cornball humor, and a dash of magic combine in a charming, larger-than-life fish story." - Publisher's Weekly

a Rafflecopter giveaway
Posted by Laurisa White Reyes at 3:07 PM