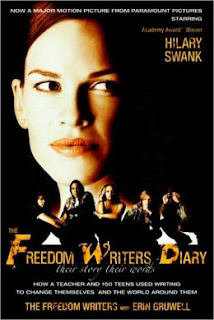 
Straight from the front line of urban America, the inspiring story of one fiercely determined teacher and her remarkable students.
As an idealistic twenty-three-year-old English teacher at Wilson High School in Long beach, California, Erin Gruwell confronted a room of “unteachable, at-risk” students. One day she intercepted a note with an ugly racial caricature, and angrily declared that this was precisely the sort of thing that led to the Holocaust—only to be met by uncomprehending looks. So she and her students, using the treasured books Anne Frank: The Diary of a Young Girl and Zlata’s Diary: A Child’s Life in Sarajevo as their guides, undertook a life-changing, eye-opening, spirit-raising odyssey against intolerance and misunderstanding. They learned to see the parallels in these books to their own lives, recording their thoughts and feelings in diaries and dubbing themselves the “Freedom Writers” in homage to the civil rights activists “The Freedom Riders.”

With funds raised by a “Read-a-thon for Tolerance,” they arranged for Miep Gies, the courageous Dutch woman who sheltered the Frank family, to visit them in California, where she declared that Erin Gruwell’s students were “the real heroes.” Their efforts have paid off spectacularly, both in terms of recognition—appearances on “Prime Time Live” and “All Things Considered,” coverage in People magazine, a meeting with U.S. Secretary of Education Richard Riley—and educationally. All 150 Freedom Writers have graduated from high school and are now attending college.

With powerful entries from the students’ own diaries and a narrative text by Erin Gruwell, The Freedom Writers Diary is an uplifting, unforgettable example of how hard work, courage, and the spirit of determination changed the lives of a teacher and her students.


The Freedom Writers Diary was made into a movie a few years ago starring Hillary Swank as Erin Gruwell. I have never seen it. I picked up this book on the recommendation of my mom, and finally read it because it is assigned for my summer school class. This is a powerful book with the potential to change lives for the better. A compilation of about 140 anonymous diary entries written by students from Wilson High in Long Beach, CA this book chronicles the amazing transformation of a group of low-achieving teens from gang-infested neighborhoods to high school grads and kids that took it upon themselves to change their own lives and the lives of others.

I loved every single page of this book and strongly encourage everyone to read it. It is often hard-hitting and even heart-breaking, but it also one of the most inspiring books I've ever read.