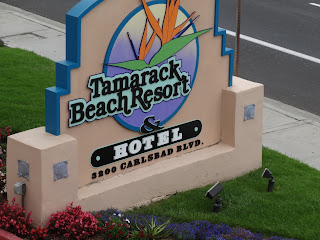 Earlier this month I spent a week with my family in Carlsbad, California. We have a timeshare at Tamarack Beach Resort, a nice little hotel right on the beach. My parents bought a timeshare there when it was first built nearly 30 years ago, so I've been going every year since then. My husband and I even spent our honeymoon there 20 years ago. We got our own timeshare about 8 years ago. So you could say Tamarack is a family tradition.

Carlsbad is close to San Diego. There are so many things to do there: Seaworld, Legoland, Scripps Oceanography museum, Reuben H. Fleet Space Museum, the San Diego Mission, the zoo, the wild animal park, the Mormon Battalion museum, the shopping, the restaurants, the pool, the beach. We never get tired of going. And it is one of the prettiest spots on the Southern California coast.

This year we did Seaworld. It's the third time we've gone this year. And we did the science museum, which the kids just loved. We spent some time on the beach, watching dolphins swim by. But as usual, the kids mostly hung out at the pool and I read books.

Carissa and I discovered something we'd never noticed before - an outdoor community bookshelf. It's just some shelves tacked onto the side of a building. Residents drop books off there and trade them for books they want to borrow. No one attends it. It's on the honor system. I suggested we create something like that in Santa Clarita, and Carissa said, "They'd all get stolen," which is probably true.

My girls and I went shopping, but were very sad to learn that our favorite spot, Harry & David's is now closed. That just sucked the joy out of the trip. Though we did get our traditional Godiva chocolate fix. We all saw Despicable Me 2 at the theater and then ate ice cream at Sub Zero. All in all, it was one of the best years ever. Even Gonzalo said so, which really means something coming from him.


Posted by Laurisa White Reyes at 9:05 AM