I recently read the book SCARLET, the sequel to CINDER. Both are phenomenal young adult science fiction retellings of Little Red Riding Hood and Cinderella, but you've never seen fairy tales quite like these. Marissa took some time out of her very busy schedule to share some insights into her books and life. There is a special surprise at the end of the interview!  Also, I encourage you to read my five star reviews of SCARLET and CINDER.

In the meantime, you can check out the book trailer for SCARLET and an a sound clip from the audio book!

1.  The Lunar Chronicles is a futuristic sci/fi retelling of some well-known fairy tales.  What made you decide to pair these two seemingly opposing genres together?

The idea started when I entered a writing contest a few years ago in which the host had listed about ten prompts and writers had to choose two of them to include in their stories. My two prompts: set it in the future and include a fairy-tale character. I loved it so much that I started brainstorming other things I could do with these two very different genres - on the surface it seems like they don't really go together, but I instantly felt that there was a ton of potential there, plus I couldn't find that it had been done before. So I ran with it! 2.  Your first novel, Cinder, was released last year to accolades. What has this past year been like for you as a new author?

It's been awesome. I'm constantly  pinching myself, wondering if this is really my life. I've wanted to be a writer since I was a kid, and in many ways I feel like I was working my way up to this moment ever since I picked up my first book. Of course, the shiny, exciting moments are great: hitting the New York Times list, touring in England, meeting with interested film producers, etc. But for me, the best moments are still those quiet days when I get to sit at home in my pajamas hanging out with my characters. I love that. 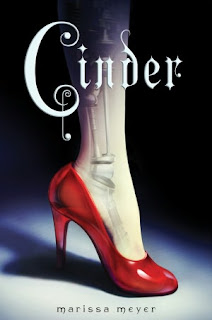 3. Could you share a little about your road to publication?

If you promise not to throw tomatoes at me. I actually had a very quick road to publication. Cinder was the first novel I finished, and once I started querying, I signed with the first agent I'd queried two months later. She and I worked on the submission package for two weeks and she went out with it to publishers on a Friday - we had an offer the following Monday. It was crazy!

That said, my husband often reminds me that when I tell this story I should probably point out that I'd been writing almost constantly since I was fourteen years old and have a BA in creative writing and an MS in publishing. So maybe I worked harder for it than I realize. :)


4.  What sort of books did you enjoy reading when you were younger? How have they influenced you as an author?

I was a sucker for anything fantasy - I wanted spells and dragons and mermaids and epic quests! The Lord of the Rings was huge for me. It was the first book that said to me, "It is okay to make up everything - make up new creatures, new places, an ENTIRE WORLD. You're the writer, you can do whatever you want." That was pretty mind-blowing. I maintain that one of these days I will write an epic fantasy novel that requires a map on the endsheets. It's a pretty big goal of mine.

AHAHAHAHAHA. Well. This changes drastically depending on deadlines and where I am in the process. Right now I'm working on revisions for Book Four: Winter, so I'll write in my office for six to eight hours every day. Usually that's bookended by an hour answering emails and an hour or two on social networks and reading blogs. Or doing promo stuff, like answering interview questions (like these!). I try to make sure I stop working by 7:00 every day so I can relax and read for awhile.

But then when it comes to book launch time, the focus shifts drastically to more marketing, publicity, and travel, and I may not write a single word for months, which can be tough.


6.  What is your writing drink/snack of choice?

I mostly just drink water - boring, but calorie free! If I'm still writing after 4:00 or so, I'll often enjoy a glass of wine, too. As for snacks, I love cheese in all its forms. I'm really hooked on Krave Jerkey right now too.


7.  If you could visit the setting/world of any book, what would it be and why?

HOGWARTS!!!! No question. I have my wand from the Wizarding World of Harry Potter sitting on my desk as I write this.


8.  Wolf, the heart throb in Scarlet, puts many other literary heroes to shame. Is he patterned after anyone you know? Also, who are some of your favorite literary heart throbs?

Why thank you! I adore Wolf and I'm so glad that many of my readers have enjoyed getting to know him. He's not intentionally patterned after anyone - I think I wanted to write a "bad boy" who broke the bad boy mold, and Wolf is what came of that. However, some of my family have pointed out that Wolf's crazy high metabolism and inability to hold still for more than five seconds is very much like my husband, so there is that.

Some of my favorite heartthrobs (gosh, the choices!): Sturmhold (SIEGE AND STORM by Leigh Bardugo), Brigan (FIRE by Kristin Cashore), Carson (SPIRIT AND DUST by Rosemary Clement-Moore), and Mr. Darcy, naturally.

I can do better than a sneak peek! My publisher released the first chapter of CRESS (my Rapunzel retelling) last week and you can read it here: http://www.scribd.com/doc/149892070/CRESS-Chapter-One-by-Marissa-Meyer *squeal!*