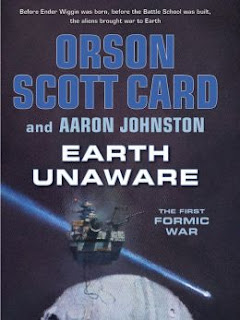 A hundred years before Ender's Game, humans thought they were alone in the galaxy. Humanity was slowly making their way out from Earth to the planets and asteroids of the Solar System, exploring and mining and founding colonies.

The mining ship El Cavador is far out from Earth, in the deeps of the Kuiper Belt, beyond Pluto. Other mining ships, and the families that live on them, are few and far between this far out. So when El Cavador’s telescopes pick up a fast-moving object coming in-system, it’s hard to know what to make of it. It’s massive and moving at a significant fraction of the speed of light.

But the ship has other problems. Their systems are old and failing. The family is getting too big. There are claim-jumping corporates bringing Asteroid Belt tactics to the Kuiper Belt. Worrying about a distant object that might or might not be an alien ship seems…not important.

They're wrong. It's the most important thing that has happened to the human race in a million years. This is humanity's first contact with an alien race. The First Formic War is about to begin.
Earth Unaware is the first novel in The First Formic War series by Orson Scott Card and Aaron Johnston.

I've been a big fan of Orson Scott Card's famous sci-fi series since I first read ENDER'S GAME several years ago. I've read every book in the Ender universe. Some books are better than others, but EARTH UNAWARE easily earns it's rightful place as prequel to Ender. Told from multiple points of view, the story chronicles the discovery an alien ship on its way toward Earth and the response of those who see it first. Card is a master at creating a future society filled with advanced tech that feels as familiar as contemporary or historical novel. His characters who live billions of miles away in deepest space are as accessible as those who live right here on our home planet.

I listened to EARTH UNAWARE on my Ipod, and the moment it ended, I uploaded its sequel, EARTH AFIRE and have already started listening to that. Though categorized for Adults, I found nothing offensive in this book. My 12-year-old son loved it as much as I did. I give EARTH UNAWARE a confident 5 stars.

Profanity:  None
Sexuality:  None
Violence:  Moderate
Posted by Laurisa White Reyes at 12:00 AM