BOOK REVIEW & GIVEAWAY: THE OCEAN AT THE END OF THE LANE by Neil Gaiman 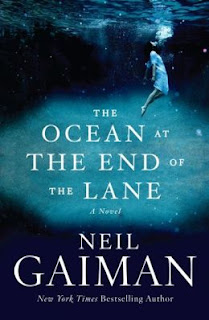 THE OCEAN AT THE END OF THE LANE
Neil Gaiman
HarperCollins
192 pp.

"Poignant and heartbreaking, eloquent and frightening, impeccably rendered, it's a fable that reminds us how our lives are shaped by childhood experiences, what we gain from them and the price we pay" - Kirkus Reviews

* At the end of the review is a chance to win a signed copy of The Ocean at the End of the Lane. The giveaway ends on August 4th.


I was first introduced to Neil Gaiman's newest tale as a  sample Audible download, which included just the first chapter, I think. I wasn't impressed. Sounded like just another story about a boy observing the world around him. Gaiman's narrative did perfectly capture the naive and introspective voice of a seven-year-old boy, but otherwise I wondered what all the fuss was about. I decided I wouldn't bother with the rest.

Then I heard Neil Gaiman was coming to Glendale to speak. Tickets were about $50 a piece, but included a signed copy of The Ocean at the End of the Lane. I did love Gaiman's Coraline and The Graveyard book, so I spent the money and went. Beside the fact that the Alex Theater where Gaiman spoke was sweltering, the experience was beyond memorable. Gaiman is a very unassuming, humble man with a gentle, British accent that could lull you sleep not from boredom, but from the sheer melody of it. When he read aloud from his book, I recognized his voice at once. He had been the reader on the audible sample. He read the very same chapter and a little more, and suddenly what seemed so blase before now felt simply magical.

I started reading it while sitting in the theater, and let me tell you, there is nothing blase or expected about The Ocean at the End of the Lane at all. The story begins with a young boy discovering the body of a dead man in his father's car. He is befriended by the Hemstock family, including Old Mrs. Hemstock, Ginnie Hemstock, and Ginnie's daughter, eleven-year-old Lettie. The boy accompanies Lettie on a strange encounter with an ancient, other worldly creature that finds its way inside of him.  And the story only gets more bizarre from there.

Yes, the story is bizarre, unpredictable, frightening, touching and miraculous all at once. It's the sort of story only Neil Gaiman can tell, and The Ocean at the End of the Lane is destined to claim its place among all the other Gaiman classics.

Profanity:  None
Violence:  Mild
Sexuality: Moderate (mentions a naked woman, and a child witnessing a sexual encounter between two adults, though from the child's naive point of view)

I am giving away (1) copy of
The Ocean at the End of the Lane
signed by the author.
To enter, just fill out the rafflecopter form below.
This giveaway ends on August 4th.
U.S. only please.
a Rafflecopter giveaway
Posted by Laurisa White Reyes at 12:00 AM