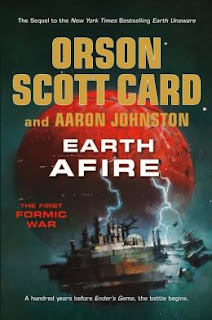 
One hundred years before Ender's Game, the aliens arrived on Earth with fire and death. This is the story of the First Formic War. Victor Delgado beat the alien ship to Earth, but just barely. Not soon enough to convince skeptical governments that there was a threat. They didn’t believe that until space stations and ships and colonies went up in sudden flame. And when that happened, only Mazer Rackham and the Mobile Operations Police could move fast enough to meet the threat.

"Social upheavals and political ineptitude are realized through rich characterization and brisk action, marrying the genre staple of alien invasion with conflicts of conscience." - Publisher's Weekly

I've read every single book in the Ender's Game universe, and I will say right off the bat that EARTH AFIRE rivals them all, with perhaps the exception of ENDER'S GAME itself. Book two in the pre-quel series takes off where book one, EARTH UNAWARE, leaves off. Victor and Imala come up with a plan to destroy the mother ship, Mazer wreaks havoc on the Formic landers on Earth, the Formic invaders destroy much of China, it's just an incredible book. Told from multiple points of view, this book is packed with action, convincing scientific detail, and unforgettable characters. I listened to the audible version, and the narrators are great, too. Card is at the top of his game in EARTH AFIRE and all I can say is I cannot wait for book three.