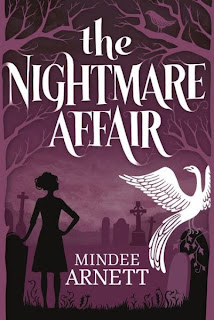 Sixteen-year-old Dusty Everhart breaks into houses late at night, but not because she’s a criminal. No, she’s a Nightmare.

Being the only Nightmare at Arkwell Academy, a boarding school for magickind, and living in the shadow of her mother’s infamy, is hard enough. But when Dusty sneaks into Eli Booker’s house, things get a whole lot more complicated. He’s hot, which means sitting on his chest and invading his dreams couldn’t get much more embarrassing. But it does. Eli is dreaming of a murder.
Then Eli's dream comes true.

Now Dusty has to follow the clues—both within Eli’s dreams and out of them—to stop the killer before more people turn up dead. And before the killer learns what she’s up to and marks her as the next target.

I really wanted to love this book. I did. I was originally drawn to it by its unique and appealing silhouette cover. But the moment the word "werewolf" appeared, I knew this would be an uphill climb. I admit, outside Harry Potter, I am not a big fan of paranormal-kind-of-books. Luckily, the werewolf policemen aren't a big part of the story, but fairies, demons, and witches are. The story is set in a Hogwarts-like school for magic-kind teenagers (as opposed to ordinaries, who are just plain old human) where one of the students is murdered and her corpse mutilated.  Dusty, the half-breed offspring of a human and a nightmare, tries to solve the mystery by entering the dreams of Eli Booker, a human who is recruited by the magic kind.

I never really understood how clues to the murder, and ultimately the entire plot to take control of "the will" (which controls magic), could be discovered in the dreams of a human who had absolutely nothing to do with any of that. I always assumed dreams were an interpretation of the dreamer's subconscious. Some things felt a tad contrived, and everything about this story felt as if it was Harry Potter, just the terminology had changed.

However, I give the author Arnett credit for weaving some classical magical legends (which I will not name here) into her story in an unexpected way.  The story, too, has a fun romantic triangle, some good humor, and fast paced action.  Fans of paranormal, fantasy, and/or mystery stories looking for a quick read, A Nightmare Affair fits the bill. While I will mostly likely pass on the sequel, (A Nightmare Dilemma, 2014) I am planning to pick up Arnett's sci-fi thriller Avalon, due out in January.