My lifelong friend and fellow writer, Noelle Campbell, recently published an awesome novella called RAGING BULL: SUPERSTITION SERIES with a unique twist on mythology.  You can get it on your Kindle for $3.99! 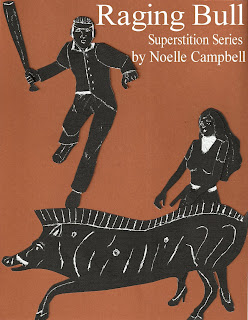 In the Superstition Series created by Noelle Campbell, not only are the Greek gods real, but Cupid has been busy. Mortals have completely mismanaged this ‘love’ thing on their own and so he is busy with his latest project. He’s picked the perfect haven for his ambitious plan to rebuild his power, influence and reputation. A little city he named Superstition. A fitting name for a city in the Superstition Mountains in Arizona. The city is surrounded by abandoned mines, a ghost town–filled with real ghosts of course–an Indian Graveyard, and enchanted forests. It’s far enough from other cities to make it comfortable for a young god trying to rebuild, but not too far away from bigger cities to make it comfortable for the mortals, and immortals, living there. But there are certain traditions that must be followed for Greek Gods, among which are building temples, quarreling with other Gods, but most importantly, recruiting followers and heroes. In the first book of the series: Raging Bull, an Army Ranger Captain–just recently disgraced in front of Congress–is blamed for the death of his unit on prime time television just in time for Valentines Day. His name is Captain Peter Vara, and Cupid has plans for him…

This series brings back heroes and renews mythology. Cupid is the god in management of Superstition, Arizona in the Superstition Mountains, and he’s actually quite Americanized. He has a soft spot for underdogs. This is an American mythology, filled with American heroes of all stripes. The cities first hero is a disgraced Army Ranger Captain. He must fight classic monsters, office politics,his own nightmares and rescue the fair maiden. The damsel in distress is hardly a model for the typical fairy tale princess. She is a deaf, adopted Hawaiian native trying to adjust to her first year of the job in the school she graduated from: Superstition High School, which just happens to be Cupids favorite place to meddle.