WIN A KINDLE FIRE in THE CRYSTAL KEEPER BLOG TOUR!!! 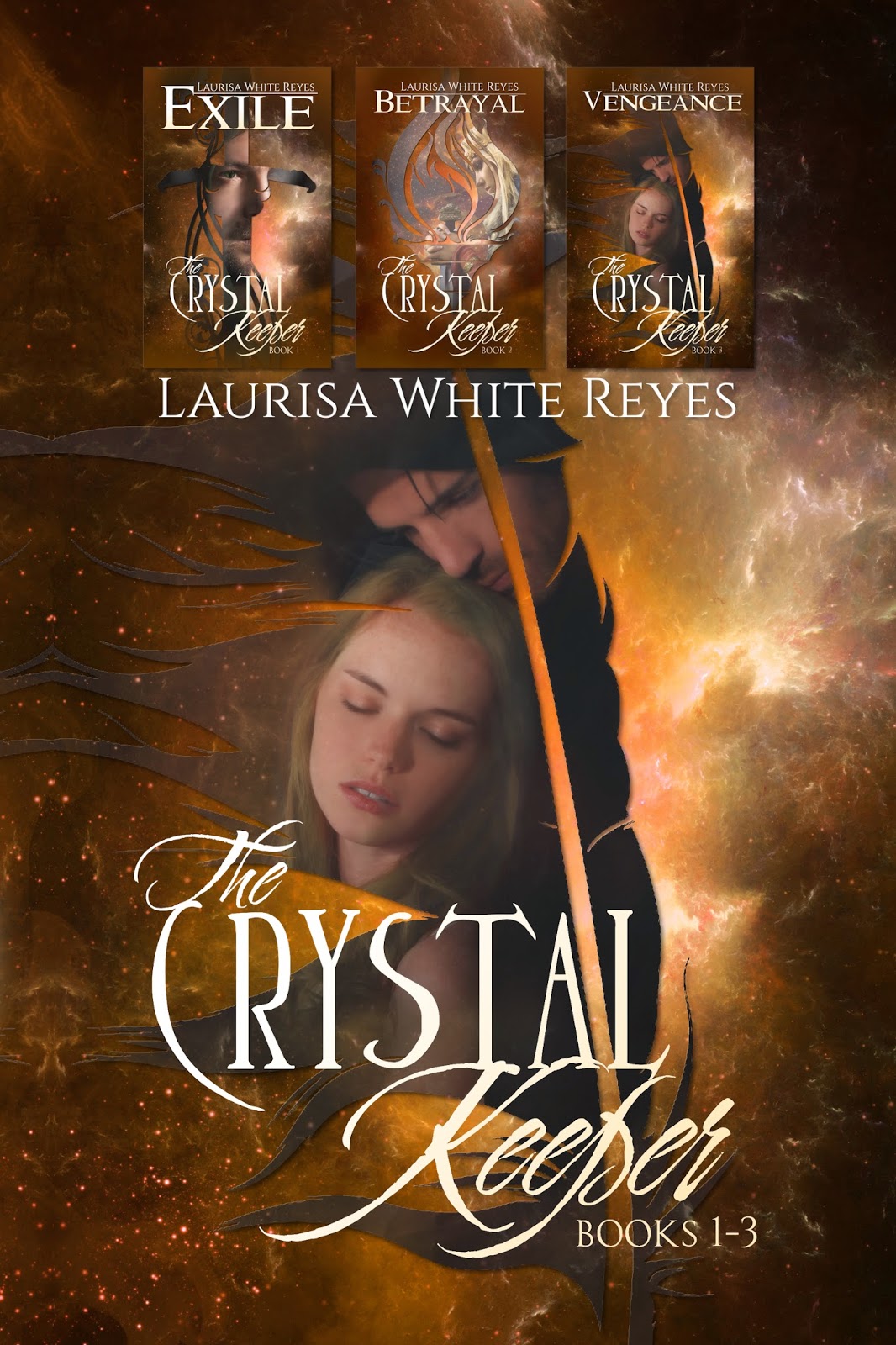 I'm so excited about my newest series, THE CRYSTAL KEEPER, the prequel to The Rock of Ivanore and The Last Enchanter. The first three books in the series are now available for Kindle, Nook, Kobo, Smashwords and in Print!

Below you will find an excerpt from Book I, EXILE. To thank you for stopping by, I am giving away a KINDLE FIRE HD 6 to one lucky winner! The giveaway will end on February 28th at midnight. To be eligible to win, you must be 18 or older and a U.S. resident.

2/16
Self Publish or Die (Promo)
http://www.selfpublishordie.com/

Ever and Ever Sight (Poss Review)
http://everandeversight.blogspot.com/

Excerpt from BOOK I: EXILE


Chapter One
Ivanore hunched over the parchment, the tip of her quill flicking above her hand like a trapped bird desperate to escape. The tallow candle cast a cramped circle of light across the table, hardly enough to see by. If only the night would last a little longer. Perhaps then she would have enough time to write everything she needed to. But alas, time was one thing she had too little of—that and light.
An older man with long, gray-streaked hair and piercing gray eyes waited beside her. The stone bungalow, their most recent of many hiding places, boasted the barest of furnishings: the table, stool, cot—and a plain wooden chest, its key held tightly in his fist.
A sudden thump sounded at the door, startling them both. A strand of Ivanore’s hair, gold as the candlelight, fell across the page. She quickly tucked it back into place and wrote faster.
Zyll laid a hand on Ivanore’s shoulder. “They are here,” he whispered.
Ivanore finished the document and handed it to Zyll unbound. Turning to the chest, he carefully laid the pages inside.
“Wait,” said Ivanore. “Will you keep this as well?” A flat circle of pale green crystal lay in her open palm.
“But you will need it. I mustn’t—”
“Please,” she insisted, pressing it into his hand. “I can’t risk losing this one.”
Zyll reluctantly folded his fingers around the cool stone. “Of course, milady,” he said. Then, adding the crystal to the parchment, he laid a plate of thin wood atop them both, sealing the chest’s false bottom. He closed the lid and locked it.
The pounding at the door grew more insistent. Whoever stood outside was using their full weight against it in an effort to break through.
“We must hurry,” said Zyll.
Ivanore allowed herself a quick glance at the chest, offering the briefest of prayers that the gods would keep it safe until her return. Then, taking her by the arm, Zyll led her through the low archway dividing the bungalow’s front room from the back.
A loud crash of splintering wood resounded through the bungalow. Their visitors had finally broken in.
“Find her now!” a deep voice bellowed.
Grateful for the trousers she now wore instead of her usual cumbersome skirts, Ivanore clambered onto a stool and through a narrow window, lowering herself as quietly as possible to the ground outside. Once Zyll had done the same, they stole away across the rocky field. Though the sky was black as ink, their path was illuminated by the amber glow of volcanic fissures scoring the area for miles around.
“There she is!” a man’s voice shouted behind them. The words sent spasms of fear through Ivanore. She glanced behind her and saw three soldiers emerge from the bungalow, wearing the gold and red cross of her father’s crest. They had tracked her even here, to the remotest corner of Imaness. Would Fredric ever let her be?
Ivanore stopped running. She looked at Zyll, her trusted guardian and ally these past months since she had fled Dokur, and knew her time with him had come to an end.
“You’ll watch over them until I return?” she asked, out of breath. “Keep them safe. Don’t let my father find them.”
“You have my vow,” Zyll whispered, his voice tight with emotion.
Ivanore’s eyes welled with tears as she pressed her lips against the calloused skin of Zyll’s hand.
“Go,” said Zyll. “Go now before it’s too late.”
Ivanore released Zyll’s hand and sprinted forward alone. As she ran, she cupped her hands around her mouth and let out a loud, sharp call, much like that of a hawk or an eagle. She risked another glance over her shoulder and watched as Zyll turned to face their pursuers. As the soldiers neared, their swords glinting in the fire glow, Zyll held up his hands. A horizontal bolt of cerulean lightning shot out from his palms, striking the oncoming soldiers. The men recoiled, their bodies instantly singed and bloody.
Ivanore ran on. In desperation, she repeated her call, and this time another voice called back. A dark form appeared on the horizon, silhouetted against the light of the volcanic fractures and growing larger as it approached with tremendous speed. As it neared, the creature’s massive feathered wings moved the air around Ivanore in warm, powerful gusts. Ivanore saw clearly its eagle’s head with a beak large enough to break a man in two, paired with the muscular, furred body of a lion. As she ran toward it, the gryphon lowered its head, waiting.
Behind her, the soldiers reeled in pain, but they did not forget their duty. One man struggled to his knees, grunting from the effort. Reaching over his shoulder, he slid a short bow and arrow from his pack and swiftly took aim.
Ivanore reached the gryphon and in one smooth motion hoisted herself onto its back, twisting her arms deep into the feathers on the creature’s neck. In that same moment, a single arrow found its mark in Ivanore’s shoulder. She cried out before her body slumped forward and her mind went dark. The gryphon took flight then, and in less time than it took to draw another arrow—or a breath—they had vanished into the night.

Twelve months had passed since Jayson had arrived in Hestoria, and for the first time in his nineteen years, he was drunk.

The tavern keeper, a skinny man by the name of Timbrey, had him by the neck. “Cheat me out of two pints, will you?” he said, shoving Jayson out the tavern door. “And keep your silly trinket. I only take real money here! Worthless Agoran scum!”
Jayson stumbled and fell face first onto the wet cobbled road. If he hadn’t been so intoxicated, he could have easily fought the man and won. But at the moment, Jayson had neither the strength nor the inclination to do it.
He lay there in the street, cursing the gods and Lord Fredric for sparing his empty, meaningless life. Execution would have been preferable to living as an outcast with only the shadows and his memories to keep him company. Although, that wasn’t completely true. He did have Arik, but where the hell was he now?
That’s right, Jayson remembered. The boy was still inside the tavern, arranging for a room.
Timbrey’s words rang in Jayson’s ears. Agoran scum. Was it his fault he was only half-human? That his father had loved an Agoran who had born a child with slitted pupils and claws like a cat? Aside from that and his thick mane of dark hair, Jayson looked like any other man. But no Hestorian would ever let him forget what he really was. A mongrel. A half-breed.
Jayson managed to get up on his feet again. Leaning forward and resting both hands on his knees, he waited for the world to stop spinning. His stomach rebelled against him, and the sickly yellow bile landed between his feet.
If the stench of his own vomit hadn’t pervaded his senses, he might have smelled the thief approaching him from behind. Instead, the scrape of a metal blade sliding from its sheath alerted him. Jayson spun round just as the dagger sliced through the edge of his cloak. The dagger came down again, slashing at Jayson’s waist, but again the blade had missed its mark.
Or had it?
Jayson slapped his hand against his belt and found the cut end of a thin leather strap. “Gods be damned!” he said.
Though it was the middle of the night, the darkness was no obstacle for his eyes. Even so, his assailant’s features were concealed beneath a dirty rag tied at the neck. The thief turned to run, but Jayson lunged forward, catching him around the knees. Both slammed into the cobblestone. Jayson, dizzy from too much ale, tried to hold on, but the thief wriggled free.
As the thief scrambled to his feet, Jayson saw a leather pouch clutched tightly in his fist—the very one he had sliced off Jayson’s belt. Jayson lashed out with his claws, but the liquor in his blood slowed his reflexes. He managed only to graze his assailant’s arm. The pouch dropped to the ground as the thief’s good hand snapped up to clutch his wound. Then he turned and sprinted away into the darkness.
Jayson scooped up the pouch and, deciding to put it out of sight, tucked it into his boot. Once again, he struggled to get on his feet, but the buildings spiraled around him. A gray fog blurred his vision, and it seemed as if a gaping black chasm had opened up in front of him. Jayson staggered forward, wavering at its edge. Then he fell, letting the void swallow him.