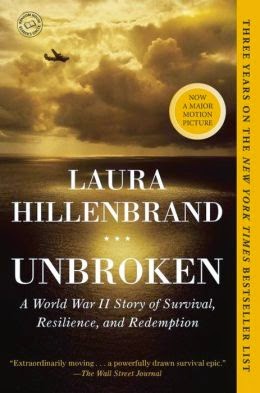 
On a May afternoon in 1943, an Army Air Forces bomber crashed into the Pacific Ocean and disappeared, leaving only a spray of debris and a slick of oil, gasoline, and blood. Then, on the ocean surface, a face appeared. It was that of a young lieutenant, the plane's bombardier, who was struggling to a life raft. So began one of the most extraordinary odysseys of the Second World War.

The lieutenant's name was Louis Zamperini. In boyhood, he'd been a cunning and incorrigible delinquent. As a teenager, he had channeled his defiance into running, discovering a prodigious talent that had carried him to the Berlin Olympics. But when war had come, the athlete had become an airman, embarking on a journey that led to his doomed flight, a tiny raft, and a drift into the unknown.

Ahead of Zamperini lay thousands of miles of open ocean, leaping sharks, a foundering raft, thirst and starvation, enemy aircraft, and, beyond, a trial even greater. His fate, whether triumph or tragedy, would be suspended on the fraying wire of his will. Unbroken is a testament to the resilience of the human mind, body, and spirit.

I saw the movie of UNBROKEN on Christmas Day. Loved it. I was so inspired and was brought to tears. I'd heard the controversy surrounding it, but couldn't see anything wrong with the movie at all, except that maybe the truth of history is sometimes hard to swallow.

I enjoyed the film so much I decided to read the book (or listen as the case may be). Zamparini's true story of his rise to athletic fame, crash landing in the Pacific Ocean, surviving weeks on a life raft, and subsequent brutal treatment as a prisoner of war blew my mind. Hillenbrand not only tells his story with exquisite detail that makes you feel like you're right there in the raft or the camp with Louie, she fleshes out his entire world with mind boggling details about the Olympics, the World War II bombers, the Japanese attempt to take over China and so much more. And the story doesn't end there.

After the war, Hillenbrand follows Louie through his nightmares and forgotten promise to God, and finally to his redemption. The entire story from beginning to end is riveting and truly inspiring. This, above all else, is a story of faith and endurance. Every American ought to read this book.

Profanity:  None
Violence:  High
Sexuality:  None
Posted by Laurisa White Reyes at 8:00 AM