BLOG TOUR: THE REVELATION OF LOUISA MAY ALCOTT by Michaela MacColl 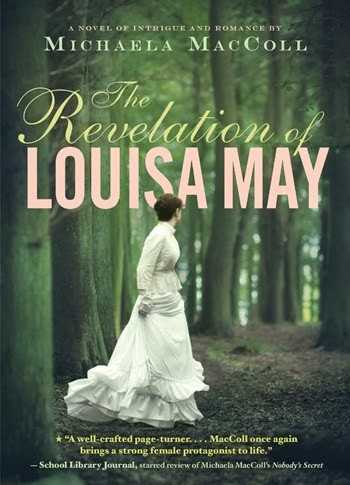 
Louisa May Alcott can't believe it—her mother is leaving for the summer to earn money for the family and Louisa is to be in charge of the household. How will she find the time to write her stories, much less have any adventures of her own? But before long, Louisa finds herself juggling her temperamental father, a mysterious murder, a fugitive seeking refuge along the Underground Railroad, and blossoming love. Intertwining fact, fiction, and quotes from Little Women, Michaela MacColl has crafted another spunky heroine whose story will keep readers turning pages until the very end.

Michaela attended Vassar College and Yale University earning degrees in multi-disciplinary history. Unfortunately, it took her 20 years before she realized she was learning how to write historical fiction. Her favorite stories are the ones she finds about the childhood experiences of famous people. She has written about a teenaged Queen Victoria (Prisoners in the Palace, Chronicle 2010) and Beryl Markham’s childhood (Promise the Night, Chronicle 2011). She is writing a literary mystery series for teens featuring so far a young Emily Dickinson in Nobody’s Secret (2013) and the Bronte sisters in Always Emily (2014).  She has recently begun a new series with Boyd’s Mill/Highlights called Hidden Histories about odd events in America’s past. The first entry in the series is Rory’s Promise and will be published in September 2014. She frequently visits high schools and has taught at the Graduate Institute in Bethel, CT.   She lives in Westport CT with her husband, two teenaged daughters and three extremely large cats.
Posted by Laurisa White Reyes at 12:00 AM