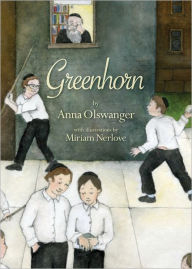 
In Anna Olswanger's Greenhorn, a young Holocaust survivor arrives at a New York yeshiva in 1946 where he will study and live. His only possession is a small box that he never lets out of his sight. Daniel, the young survivor, rarely talks, but the narrator, a stutterer who bears the taunts of the other boys, comes to consider Daniel his friend. The mystery of what's in the box propels this short work, but it's in the complex relationships of the school boys that the human story is revealed. In the end, Aaron, the stutterer, finds his voice and a friend in Daniel, and their bond offers hope for a future life of dreams realized, one in which Daniel is able to let go of his box. Greenhorn is a powerful story that gives human dimension to the Holocaust. It poignantly underscores our flawed humanity and speaks to the healing value of friendship. Families will want to read Greenhorn together.
___________________________________________


A couple years back I posted a glowing review of Anna Olswanger's book, GREENHORN, about a young Jewish refugee who attends a New York boy's school in 1946. If you haven't read it, you should. And now it's been made into into a short film, perfect for sharing with students when discussing the Holocaust or Jewish history. This story is a tender remembrance of one of the most horrific episodes in recent world history. It is also a reminder that every human life has value and that we, as a society and as the human race, must never allow such tragedies to occur again. It is vital we keep the memory of the Holocaust alive in the next generation, and Olswanger's film is the perfect vehicle to do just that.

Click HERE to read my original review of the book.

The film premiered at the Landmark NuArt Theatre in L.A. and at The Museum of Tolerance in New York. It was named the 2015 Audience Award Winner for Best Short Film Drama at the Morris and Mollye Fogelman International Jewish Film Festival in Memphis, and subsequently aired on public television in Memphis and Kentucky. Last month it was part of the Festival Internacional De Cine Judio en Mexico and will screen on March 27 at the International Children’s Film Festival at L.A.’s WonderCon.

Libraries and schools can purchase the DVD with public performance rights and show the film in classrooms. To obtain a copy, visit this link:
http://www.tmwmedia.com/productlisting/details/greenhorna-story-of-friendship-in-the-aftermath-of-the-holocaust
Or you can purchase it on Amazon: http://www.amazon.com/Greenhorn-Friendship-Journey-Aftermath-Holocaust/dp/B01C4UBB10/ref=sr_1_2?ie=UTF8&qid=1457901089&sr=8-2&keywords=greenhorn+film

A teacher's guide is available here:  http://www.tmwmedia.com/newtmw/teachers_guides/L4812DVD.pdf
Posted by Laurisa White Reyes at 8:53 AM