MMGM: Win a copy of ONCE WAS A TIME by Leila Sales!

* Interview with Nicky Peacock, author of the BATTLE OF THE UNDEAD SERIES
* A fan letter from 7-year-old SARAH
* TWIST MY CHARM: LOVE POTION #1 Toni Gallagher 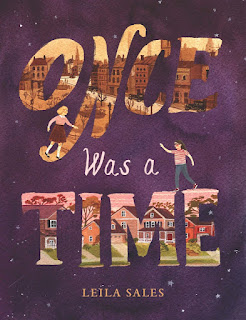 ONCE WAS A TIME
Leila Sales
Chronicle Books
10 and up

Scroll down for an interview with the author and a chance to win a copy of the book!

In the war-ravaged England of 1940, Charlotte Bromley is sure of only one thing: Kitty McLaughlin is her best friend in the whole world. But when Charlotte's scientist father makes an astonishing discovery that the Germans will covet for themselves, Charlotte is faced with an impossible choice between danger and safety. Should she remain with her friend or journey to another time and place? Her split-second decision has huge consequences, and when she finds herself alone in the world, unsure of Kitty's fate, she knows that somehow, some way, she must find her way back to her friend. Written in the spirit of classic time-travel tales, this book is an imaginative and heartfelt tribute to the unbreakable ties of friendship.


“Rewarding and uplifting.” — Kirkus Reviews
“Will delight those who revel in the vast mysteries of time and coincidence.” —The Horn Book Magazine
“Shines in its portrayal of friendship.” —School Library Journal
“The bond between Lottie and Kitty-proves to be both tender and unstoppable.” —Booklist
"An imaginative and heartfelt tribute to the unbreakable ties of friendship."— Middle Shelf Magazine

I always wanted to be an author. I wrote my first middle-grade novel and started submitting it to publishers when I was 11. It got rejected everywhere, which was disappointing at the time, but I now realize is DEFINITELY for the best. It was well-written for someone who had never written a book before, but I had a ways to go before I would be writing at a professional level.

When I was 12 I joined the Society of Children’s Book Writers and Illustrators (SCBWI), as well as an online listserv of other writers of kids’ books, most of whom were adults, all of whom were at various stages in their publication journey. It was great having these other people to turn to who were pursuing the same dream as me—people who didn’t know I was a kid and therefore took me seriously. I attended my first SCBWI conference a month before my middle-school graduation, which I remember because I got one fancy grow-up looking outfit to wear to both events!

Throughout middle school, high school, and college, I went on to write another five unpublished middle-grade and YA novels. I submitted all of them for publication, but never had any success. I was getting better, but still not quite there.
After graduating from high school, I got a job at a children’s book publisher. I didn’t know if I would ever manage to make a living as an author—after all, I’d already spent half my life trying to sell a novel, so who knew how long it could take. But I did know that I loved children’s books and wanted a career that allowed me to work with them in some capacity.

Even though I had a job now—a job that I found enormously fulfilling—I made time for writing. Around the time I was 25, I met a literary agent at a party through mutual publishing industry friends. I told him about the YA novel I was working on at the time, a comedy told in vignettes about two best friends at an exclusive all-girls prep school. (If you read ONCE WAS A TIME, you’ll realize that girls’ friendship is one of the most important themes in my books.) This agent asked if he could take a look, so after I’d revised the manuscript a ton, I sent it to him, and he offered to represent me. A couple months later, I had a two-book deal with Simon & Schuster, and that comedy became my first published novel, entitled MOSTLY GOOD GIRLS.

The experience of selling my first book is one of the most intense things that has ever happened to me. In a way it didn’t change much: I kept working at the publisher (and indeed, I still do). I didn’t suddenly become rich and famous; I didn’t move into a fancy house or start drinking champagne with Beyonce. My day-to-day existence did not change very much at all. But this life-defining dream had come true. The main thing I wanted to achieve with my life, I had now achieved.

Of course, it’s not like I achieved this goal and then was just done forever. A year after MOSTLY GOOD GIRLS came out, Simon & Schuster published my second YA, PAST PERFECT. After that, I moved over to Macmillan to publish THIS SONG WILL SAVE YOUR LIFE. Then I sold another two YA novels to Macmillan, as well as my first-ever middle grade novel, ONCE WAS A TIME, which is just out now with Chronicle.

I should be clear that it’s not like you sell one book, and then you know how to write successful books every time thereafter. For each novel I’ve published, I’ve written the first few chapters of many, many other books that didn’t quite work and eventually fizzled out. And for each publisher who’s wanted to acquire a book that I’d written, there were always, every single time, other publishers who said “this one doesn’t work for us.” Writing is sort of like playing basketball. It’s not as if once you make one basket, then every other shot you take after that is guaranteed to go in. You’re still going to miss a lot of the time. But the more you practice, the more likely you are to score.

ONCE WAS A TIME is really exciting for me, because it’s the book I’ve published that’s most like those stories I was writing in middle school: a bit younger than my YA novels, with some magical elements (specifically time travel!). It’s geared at a different audience than any of my previous books—nine to twelve year olds rather than teens. It’s less intense than the very first time I published a book, but every time is amazing and eye-opening, and every time feels like a gift.

** Leila Sales is the author of many critically acclaimed young adult novels, including Tonight the Streets Are Ours and This Song Will Save Your Life. She lives in Brooklyn, New York. Visit her at leilasales.com